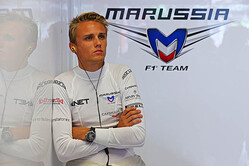 Only 18 cars will line up on the grid in Austin next week as Bernie Ecclestone confirms that Marussia will miss the United States GP also.

Less than 24 hours after the F1 supremo gave Caterham permission to miss the next two races (United States and Brazil), due to its ongoing situation, Marussia is also to miss the American event.

"Neither of those two teams are going to go to America," he told Reuters.

With the FOM air package due to head to Austin today (Saturday), it is likely that in missing Austin Marussia will therefore miss Brazil as the two events are back-to-back due to their proximity on the other side of the Atlantic.

Marussia, which is still reeling following Jules Bianchi's accident at Suzuka, is also understood to be in financial difficulty, though it has yet to comment on Ecclestone's revelation and has failed to respond to requests for confirmation, or a denial, of its situation when contacted by Pitpass.

Other than giving Sauber the opportunity to score some points - if only due to the potential of a high attrition rate, particularly in Brazil, Marussia's absence means Alexander Rossi will not to get to make his F1 race debut.