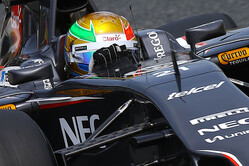 The inaugural Russian Grand Prix on the newly built Sochi track didn't deliver too much action. Almost all the drivers were on a one stop strategy, and, as a result, there were no real surprises. The Sauber F1 Team drivers came home in P15 (Esteban Gutierrez) and P16 (Adrian Sutil).

Esteban Gutierrez: "It was a clean race with an interesting first part. We were betting on having a safety car period during the first stint, and this is why we extended this run. It was not ideal for the strategy, but we took that risk and hoped to gain an advantage. In the end, the safety car did not come out. Although I think the way the tyres were behaving and the way the car drove was pretty enjoyable, on the other hand finishing in P15 was very frustrating, after a race where almost everything went very well. However, we will keep fighting until the end of the season to have a chance to score points."

Adrian Sutil: "The start on the medium tyres was difficult, as I had almost no grip. In addition, several drivers behind me put the soft compound on, which was a clear advantage. In Turn 1 I had no space and was forced to drop back. It was very slippery on this set, I lost some time in every corner and, as a result, positions. We decided to go for an early pit stop in order to change to the soft tyres. Afterwards I was able to continue the race without major incidents, although the grip level reduced towards the end. We knew that the start on the medium tyres was a risky strategy in case there was no safety car period. In the end, no safety car came out. However, it was in general difficult to finish the race in the points with our pace. We still need to do our best during the upcoming races."

Monisha Kaltenborn, Team Principal: "We went into the race knowing that, under normal circumstances, things would be difficult for our team. Therefore we opted for a strategy which would have been beneficial in case of a safety car period. However, this didn't work out, so we were not in a position to fight for points."

Giampaolo Dall'Ara, Head of Track Engineering: "On the technical side of things everything was okay. The drivers did a good job, and the team worked well. So there was nothing to complain about. We decided for a split strategy, featuring pit stop windows out of the optimal ones, in order to cover most of the possibilities, as it was clear that, based on our current performance, there wouldn't be many chances for us. But, as everything in the race went smoothly, we couldn't benefit from a special situation, so in the end we got what we expected with where we are at the moment."