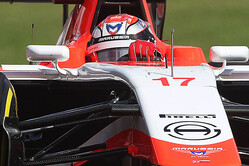 A tough day in Suzuka saw the Marussia F1 Team's qualifying session fall short of expectation. In the case of Jules Bianchi, a trip to the weighbridge after his opening run left the team battling to squeeze in two further planned runs, and in the end he did in fact run out of time, aborting his final foray after the first lap. With Max, his flying lap of the third run was looking strong, but he lost the rear at turn 13 and, along with it, the advantage he had to the cars around him in the first two sectors.

Jules Bianchi: "A frustrating result for us. I'm happy with the laps I did, but we did not reach our plan, which was for three runs, and so we ran out of time to try to get ahead of the Ericsson of Caterham. This is not where we want to be, but we did not have any upgrades for a while and they have obviously made a step forward which, at this track, reflects well for them. It's a shame, but, as always, we'll just focus on what we can do for tomorrow because, for sure, the race will be interesting, one way or another."

Max Chilton: "I'm very angry with myself. I was 0.4s up on that last run, with only a sector to go, and it would have been close between all three cars around me, so who knows where I could have ended up . Unfortunately, I just lost the rear into turn 13. I'd like to think we can pull it back tomorrow, but at this stage the race is difficult to predict, as we just can't be sure to what extent the threatened weather might intervene. All things being equal, I think we can get ahead. A disappointing result today, but we'll do our best tomorrow."

John Booth, Team Principal: "This morning the two cars had slightly differing balances and Max was in a slightly better position than Jules, who was suffering with quite a lot of oversteer. Through much of the morning and the lunch break, the focus was to try to improve Jules' balance and also optimise Max's set-up as much as possible. In qualifying, with the clear issue of challenging weather conditions tomorrow, we opted to complete three runs, with the first two separated by a pit stop. Unfortunately, Jules was called to the weighbridge, so we switched his plan such that his pit stop would be between the second and third runs. With the time he lost on the weighbridge, he was not able to make the line for the final lap, and on the lap he had to settle for as his best qualifying time, he had an excess of fuel. I'm sure the third run lap would have been much quicker and placed him better than where he is now. With Max, he was up in the first two sectors of his final run, but lost time in one corner, which is very frustrating for him. Overall, with both cars, we have not been able to demonstrate our full potential. For tomorrow, clearly the weather is going to be a major factor. It will be a race where the strategy calls become almost more important than the ultimate pace of the car. Race strategy is an area where we have been particularly strong for much of the year, so, regardless of our disappointment today, we approach Sunday with some confidence."