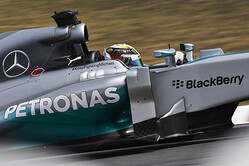 While the customer Mercedes teams are expected to give the works outfit the biggest challenge this weekend, in reality it was Ferrari that came off 'best of the rest' earlier. However, it is still very early days.

Williams, regarded as the biggest threat to Mercedes, did their usual this morning, concentrating on testing and playing their cards very close to their chest.

After a couple of disappointing weekends, it was good to see Force India back on form, both drivers in the top eight.

An engine issue meant that Sebastian Vettel missed the last fifteen minutes of running while both McLaren drivers looked competitive.

The big story this morning was the U-turn at Marussia where Max Chilton, having been dropped/stood down (whatever version you want to believe) in favour of Alexander Rossi, is now back in the car for the remainder of the weekend.

There were no major issues in terms of offs though there were a few wobbles, most notably at Pouhon, and a scary moment for Hamilton in Eau Rouge. Spins at La Source also for Ericsson and Raikkonen.

In the Red Bull garage mechanics continue to work on Vettel's car.

As Chilton heads back to the pits following his installation lap, there are some ominous dark clouds closing in.

With an eye on the weather more and more drivers take to the track including Magnussen, Maldonado and Button.

It's all over for Maldonado who has gone off into the barriers at Pouhon. Replay shows the Lotus driver begin to lose the car coming out of T9 and finally coming to grief as he heads into Pouhon. The session is immediately red flagged.

Magnussen is currently quickest (52.677), ahead of Bianchi and Lotterer.

The session resumes and in no time at all there are cars on track, one side of the track basked in sunshine the other overshadowed by that big dark cloud.

Alonso goes quickest with a 51.693 but Rosberg is already on a hot lap, the German going quickest in S1.

As Christian Horner confirms that Vettel will not be appearing again today, Ricciardo gets it all wrong at Lew Combes. Running over the unforgiving kerbs the Australian takes a real pounding.

The camera picks up on Gutierrez who is stationary and facing the wrong way aftyer a spin in Blanchimont. Asked if he can get back to the garage he replies that there is a problem with his gearbox - the cause of the off. "I turned in, and that was it," moans the hapless Mexican. The session is red flagged as the Sauber is recovered.

This comes just as countryman Perez had left the pits on option tyres, the first driver to make the switch.