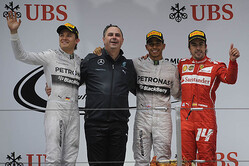 Three consecutive for Lewis Hamilton - how about that? Great stuff, Lewis. That looked, from where we were sitting, incredibly easy. How was it for you?
Lewis Hamilton: Ni hao. The fans have been incredible this week, so I really felt a lot of energy but I really couldn't do this without all the hard work from the team, it's incredible. Honestly, I just can't believe how amazing the car is, and how hard everyone has worked. The results we're getting is a real true showing of all the hard work.

Absolutely incredible. You were radioing in and saying 'my tyres feel good' and everybody else was screaming to come into the pits. The first stint was just beautiful for you.
LH: Yeah. Surprisingly, again, as I said, after P2 I had to make a lot of changes in anticipation of today, even though yesterday was wet, but it worked perfectly and I was able to look after the tyres. After that I was just really racing myself. I did lose a lot of time after the first stop but still it was great. I am really happy that Nico is up here with us, it's great points for the team and they really deserve it.

You had one little trip off the circuit, obviously when the front tyres were finally going away. A little fright there for you?
LH: No, no, fortunately there's lots of run-off area. Basically the left front is the one that's graining and wearing and I'd gone quite a lot longer than I'd planned and eventually the tyre was dead so I locked it, but it was OK and I recovered.

Nico, you still lead the Formula One World Championship so some consolation in that respect?
Nico Rosberg: Yeah, definitely. That's there. I'm not going to use the word still because I plan to keep it that way. Definitely in the lead and that's good. Especially considering that the whole weekend was really, really bad for me. It went completely wrong in so many different respects. Also, in the race we had no telemetry so there was no communication between the car and the pits, so they had no idea what was going on on track and that's why the start was also so bad and a lot of things came together. So I'm pleased with second and I just look forward to a normal weekend again in Barcelona, full attack again.

Yeah it was a bad start. Take us through that first corner when you had contact with Valtteri Bottas in the Williams.
NR: It was just very close, there were cars all over the place. Just had a bit of contract there and it was great that my car held on.

Then you had to make your way back through the field. You had a little bit of fun coming through?
NR: It's really a pleasure to drive this car at the moment. It's incredible the car that the team has built - fantastic. So thanks to the whole team. And Mercedes. This thing is so quick. It really increases the enjoyment level even further.

Let's talk to Fernando Alonso, third for Ferrari. I know there are a lot of Ferrari fans out there and of course Fernando Alonso fans. Fernando, you beat the Red Bulls and you're third only behind the Mercedes Benz cars. You must be really satisfied with that.
Fernando Alonso: Hello everybody, first of all. It was a good weekend. We did improve the car a little bit compared to the first three races, so we felt more competitive and now in the race being here on the podium is some kind of surprise for us, a nice surprise finally. Happy with a podium finish today. I think I'm third in the Drivers' Championship behind these two guys. So we didn't have the start of the season that we would like but at the end of the day we're still in the fight.

Just briefly you had a big contact with Felipe Massa going into the first corner. You were lucky [there] with no suspension damage.
FA: Yeah, it was a big contact. I asked on the radio 'can you check the car', because it felt OK but I don't know how it looks from the outside, but it was OK and we managed very lucky to finish the race and hopefully next one it will be a clean start.

Lewis, we're back to tracks you know well, obviously Barcelona, you've got some testing coming up. Surely you can't keep improving this car?
LH: Well, this team is a on a roll that's for sure. The team have done a great job, as I said. We're going to keep pushing; we're going to keep moving forwards. That's what Mercedes Benz want to do. They want to keep moving forward, developing, hopefully improving the engine, also the car. But as I said, I'm going to be working hard, we're going to keep working hard because obviously the others are pushing to catch us up. So I hope it continues.