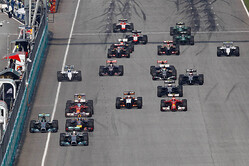 Not satisfied at being 'told off' by Lewis Hamilton on Saturday, teammate Nico Rosberg and Sebastian Vettel continued their bickering during Sunday's post-race press conference.

While post-race attention focussed on the latest punishment meted out to Daniel Ricciardo and the team orders saga at Williams, Rosberg and Vettel were at it once again during the official press conference.

On Saturday the pair were effectively told to shut up by Lewis Hamilton as they bickered over Vettel's claim that Rosberg had impeded him in the final moments of qualifying and thereby prevented him from completing another lap. As the pair squabbled, Hamilton, who had been asked his feelings at having matched Jim Clark's record of 33 pole positions, was forced to say: "Hey guys, I can't even hear myself talk!"

"We're still figuring out who it was..." replied Vettel.

Unfortunately, following yesterday's somewhat controversial start, which saw Vettel move right across the track and force Rosberg worryingly close to the pit wall, the pair were at it again.

"I had a really good start, so I was happy about that because it's not so easy this year," said Rosberg. "The rear tyres are harder and we have more torque. So it's very difficult to get it right - but it felt great and got away well and then Sebastian… I thought he was going to put me right into the wall, but he stopped just before - so thank you for that!

"I had a similar experience last year..." countered the world champion.

"...that doesn't make it right to do it again!" snapped Rosberg.

As sections of the media seek to create a Prost/Senna McLaren-type situation at Mercedes, it might be worth watching the two Germans, particularly as their frustration with other factors begins to set in.