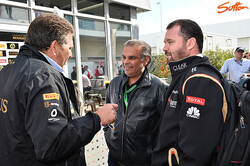 Lotus team boss Eric Boullier remains confident that the deal which will see Mansoor Ijaz's Quantum Motorsport buy a 35% stake in the team is still on course.

Having said in Abu Dhabi that the deal was only a week away from being concluded, many were a little more sceptical when the US-born business man repeated the claim in Austin, blaming the delay on the banking process, especially when it comes to money coming out of the Middle East.

To paraphrase the old saying, 'no news is good news', it is a fact that ‘no news is no news’, and with each passing day the scepticism grows.

Already a number of key team members have departed, most sensationally Kimi Raikkonen, whilst many more employees at Enstone are already looking at exit strategies.

Asked yesterday for an update - on a deal which was announced as done back in mid-June - Boullier said: "There is still some discussion ongoing, especially now between bankers. The process is not fully completed but I think part of it has been done, which is obviously a good sign for the weekend and we hope that everything is closed by early next week."

When, during yesterday's press conference, it was pointed out that Ijaz has history, as a quick Google will soon reveal, and whether due diligence had been done, Boullier replied: "We don't have to base our judgement only on Google, with all respect to Google for what they are doing. To answer the question, yes, we have very serious proof of funds and good compliance of what is Quantum Motorsport."

As we have been saying for some time, there is something very wrong here, and whilst some might describe it as sensationalist media s**t-stirring, the fact that key team members have jumped ship, the fact that many creditors have not been paid, is proof that our fears for Lotus are not unfounded.

For some time there has been a nagging fear that Ijaz has been playing for time and that the deal will only fall through once the season is over and the sport is no longer in the spotlight. However, should that prove to be the case, it won't make things any easier for the creditors or indeed the people at Enstone... "some of the finest people" Ijaz has met "anywhere in the world".