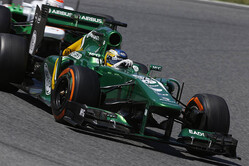 Charles Pic: "I had a good start but we'd already decided to serve the drive-through penalty at the end of lap one to get it out of the way and I was playing catch up from there. My target from there was to pass Chilton and I finished almost 20 seconds clear of him so that's about as much as we could have hoped for today.

"I was on a set of hards for the first stint and they held up ok, they felt pretty good and I was given the all-clear to push quite early on so aimed to cut the gap as much as I could. We stopped for the first time on lap 17 and did the second stint on new options and my pace was good on them, right up until the second stop on lap 35.

"The final stint was on another set of hards and I came out around 11 seconds behind the Marussia so pushed as hard as I could and had the gap down to eight seconds with 11 laps left. I was gaining on him at about a second a lap and with five laps left I got him and pulled away, finally finishing 18th. I have to say I'm pretty happy about that, bearing in mind the time I lost on the first lap but I just kept pushing. I think it's a fair result today for the work the whole team put in, and one that shows we never stop fighting."

Giedo van der Garde: "My start was ok but going into turn one I was squeezed between both the Marussia cars and had nowhere to go. I lost my front wing in contact with Bianchi and then the car went straight off and into the wall. It was quite a heavy impact but I'm ok. Obviously that's disappointing, but it was a racing incident and sometimes these things happen so now we'll move on to India and push for a better weekend there and for the rest of the season."