The Formula One circus headed into the last European race of the season knowing that the circuit represents a unique challenge. The 3.6 mile Autodromo Nazionale Monza is nestled in parkland and represents a unique challenge for both teams and drivers with only chicanes and a few medium downforce corners breaking up the long, super-fast straights. It therefore comes as no surprise that many teams have Monza specific parts to cater for this low downforce circuit. As I discussed in my previous roundup (Spa) some of the teams took the time to simulate their extremely low downforce rear wing configurations during the free practice sessions. 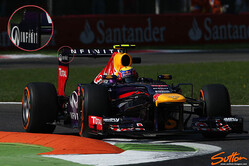 With neither of its drivers completing the Italian GP in 2012 the team was eager to continue its current momentum and take a result in Ferrari's back yard. 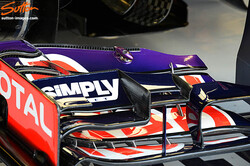 The team arrived with the same low downforce rear wing it had tested in Spa featuring endplates devoid of the louvres we usually see that reduce drag. Louvres aren't really required when you are running a shallow 'angle of attack' like Red Bull used at Monza as the drag penalty is severely minimized.

Red Bull started the weekend with its regular front wing featuring the main cascades but was devoid of the small strakes we have seen added to the front of the wing over the last few races in order to guide airflow to the rearward strakes, further minimising drag. 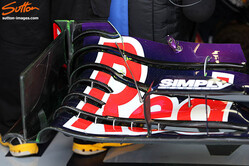 However as the weekend developed and it became apparent that other teams were sacrificing their cascades (used to turn the airflow outbound and over the front wheels), Red Bull also decided to run without them. Interestingly we can also see the team started to trim the level of downforce the front wing was producing also, curtailing the top flap's height (left of the adjuster) and removing the gurney trim completely. 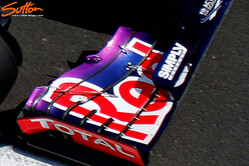 Meanwhile for qualifying and the race Webber's side of the garage went one stage further taking a further few millimetres off the inboard edge of the top flap, further reducing the force being created by the wing.

The team element of the sport is often overlooked by the fans but Ferrari know only too well that it needed a good result on home turf to accelerate away from Mercedes in the battle for what will surely be second place in the Constructors' Championship. 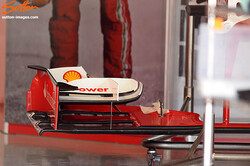 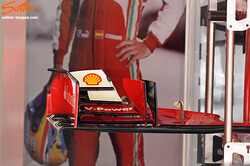 Whilst the newer wing featured a cascade-less arrangement, two vertical vortex generating fins were added to control the airflow around the front wheels. 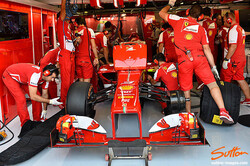 As we can see here, when the large top flap was added the team decided not to cut away the upper section of the flap like they did in Spa

Prior to the change back to the 2012 construction Pirelli tyres a little earlier in the season, Ferrari had been working on extension of the bodywork around the exhaust (see the difference in length in the black section of bodywork behind the UPS logo) and new curved airflow conditioners that met with the side of the cockpit to enhance the downwash airflow toward the exhaust.

Since then the team has reverted to the shorter sidepods and vertical airflow conditioners. In free practice at Monza the team once again assessed the longer bodywork although this time it retained the vertical flow conditioners. Its simulation work obviously shows the two packages are quite close in terms of performance with the splash zone of the exhaust plume and cross-under of the airflow beneath the Semi-Coanda exhaust giving differing results dependent on the application. The team did however decide to run with the shorter bodywork for the rest of the weekend. 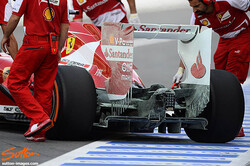 Lastly at the rear of the car the team ran the rear wing without the trailing edge slats for the first time this season which alludes to the generation of additional aspect ratio and therefore downforce that's not required for Monza. Furthermore the wing bore resemblance to the one tested in free practice at Spa with a much shallower 'angle of attack'. Other alterations to the endplates included using only a singular drag reducing louvre whilst the tyre wake slots used at Silverstone and subsequently abandoned were once again added to the leading edge.