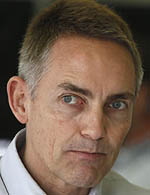 There are dark clouds settling over the McLaren garage tonight as the Woking squad comes to terms with a disastrous opening day. Both Sergio Perez and Jenson Button struggled for grip, balance and consistency in the all-new MP4-28 in what Martin Whitmarsh labelled one of the hardest days he can remember.

McLaren confessed to having taken a gamble heading into the season. While most teams simply evolved their 2012 cars McLaren instead has changed its fundamental design concept with the hope that it will unlock greater performance as the year unfolds. It is now beginning to look like a risk that hasn't paid off.

"We were lacking in overall grip, consistency, we had understeer, poor ride," said Whitmarsh, rattling off the issues as though reading a list of casualties. "So a very difficult day, one where we didn't go forward during the day, so that's a bit of a concern.

"We've got a lot of data and I'm sure that by working long and hard into the night we can give ourselves a base that we can improve upon, but a disappointing and tough day for the team," he added.

Neither Button nor Perez was any more enthusiastic than their team boss. "Our short runs weren't particularly encouraging, to be honest," Button confessed. "We're a couple of seconds off the pace, by the looks of things, and that's always going to be disappointing.

"We'll now spend the next few hours working hard, studying our data, and I'm confident that we'll be able to find some improvements for tomorrow."
However, with time short and the gap to the leaders wide the challenge simply looks too great. Indeed, if the team's body language is anything to go by the problems may be far more deeply seated.

So bleak does McLaren's future look some dubious onlookers have suggested rolling the MP4-27 out of retirement, suggesting it couldn't be any less competitive than the new car. However, without having passed the mandatory FIA crash tests even that is not a short term fix.

Indeed, the only 'Red Bull's' McLaren looks likely to battle with this weekend herald from Italy.