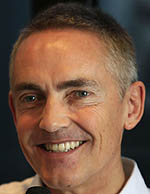 As F1 increasingly moves towards subscription TV, McLaren boss Martin Whitmarsh warns that the sport must adapt if it is to retain viewers and sponsors, far less increase them.

In those countries, including the UK, where F1is moving from terrestrial to subscription TV it has been noted that viewing figures have already taken a hit. Whilst some refuse to pay on 'moral' grounds, many simply cannot afford it. The consequential loss of viewers will therefore impact on sponsors - existing and potential - which will consequently hit the teams where they feel pain most... in their pockets.

However, with the move to pay TV almost inevitable, Whitmarsh warns that the sport must adapt.

"The traditional sport was based on terrestrial TV," he said during the recent Vodafone McLaren Mercedes phone-in, "however I think that if you focus on just that you are missing on lots and lots of opportunity.

"We've still got a sport that on a fortnightly basis, from March to November, has more than a hundred million people watching it on TV in 140 countries around the world. So the numbers are still large, though, of course, you'd like them to be larger.

"The world has changed, the viewership of conventional live television is declining because people select it, record it and view it through different media, and we've got to be alive and alert to that.

"Sky did a good job in creating a lot of interest, they put a lot of energy into it and we as a sport have got to respond to it. Clearly it's a threat to our conventional television viewing audience but Formula One has got to reach out through all the different media outlets and make sure that it continues to make a very substantial impact as the third largest sporting spectacle in the world."

In terms of the commercial impact on his own team, Whitmarsh pointed to the number of sponsors who have been with McLaren for decades.

"Formula One remains a great sporting property for brand exposure and brand differentiation," he said, "particularly for technology businesses. Everyone knows that advertising has been a challenging market. At McLaren we have partners who have been with us for more than thirty years, people like Tag Heuer and Hugo Boss, and lots of partners have been with us for fifteen-eighteen years, and we work very hard to keep those sorts of businesses inside the sport.

"We've got a few new names coming into the sport, Emirates Rolex, UPS, Blackberry, Experian, I think they're all good and I think that there are others who will be announced fairly shortly.

"We're working hard to continue to deliver value to our partners but we've got to be flexible," he admitted. "In Austin last year we changed our normal Vodafone branding for their sister brand in the states (Verizon), with GSK you've seen us switch from Lucozade to Maximuscle and Boost branding on the car.

"The sport has got to work, to continue to work as hard, or harder, than it ever has, but the fundamental principle of putting those brands on Formula One cars and getting the sort of exposure that we get, is still a very valuable sporting commodity.

"We're competing against all the other forms of media opportunity. We're not just worried about television, all the new channels, mobile media and so on, they're available to all our partners and sponsors as well so that's why traditional TV advertising is being challenged at the moment.

"We have to recognise that, respond to it, and at McLaren we have good brands who have been with us for a long time, and the role for us at McLaren is to keep delivering business value for them and that's what we aim to do."