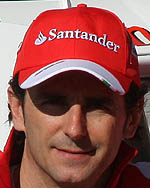 Pedro de la Rosa's Ferrari career got off with a bang this morning… literally, the Spaniard's F138 catching fire following a technical problem.

On his first run of the day, which was already over two hours into the session, the Spaniard stopped between Turns 7 and 8 with smoke and flames pouring from the back of the car.

Safely out of the car, the Spaniard watched as marshals got the fire under control before taking the stricken F138 back to the pits, where mechanics used every trick in the book to keep prying eyes at bay.

Initial reports suggest that the incident was gearbox related rather than engine and the teams fully expects the Spaniard to be back on track later this afternoon.