Pirelli to confirm 2014 deal in February 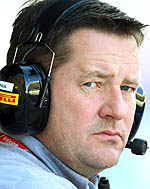 Pirelli could be confirmed as Formula One's official tyre supplier from 2014 before the Australian Grand Prix. Speaking on Pitpass' podcast, Pirelli's motor sport boss Paul Hembery claims an announcement could be made as early as February.

"We will be talking with the teams this week," he confirmed. "We've got approval to go forward as I've always said, though it's on a basis of not at every cost and any cost.

"At the end of the day we are a business and whilst F1 is a marvellous product you've also got to make decisions that make sense for the business going forward.

"So, that process is ongoing," he added. "We hope to have some results over the next month."

Discussions between the Italian tyre company and the sport's stakeholders have been ongoing for some time, Hembery admitted earlier this month (http://www.pitpass.com/48198-Exclusive-Pirelli-keen-to-remain-in-F1) that the company was close to making a formal offer.

The latest news will come as welcome reassurance for Pirelli's Formula One workforce, who currently face an uncertain future beyond the end of this season.

"We've got over 400 people involved in the project," Hembery explained. "You can imagine that's 400 people with families that also want to know what we're doing, because if we don't go forward we have to reallocate those resources. You don't do that in a couple of months, you need a plan. There's a lot of reasons we need to have clarity at the earliest opportunity."

"There's no discussions," he insisted. "We're very happy with what Jaime (Alguersuari) and Lucas (di Grassi) have done and we don't foresee any reason to change unless one of those guys got a really good drive doing something that takes them away from being available.

"They've done a good job and we don't see a need to change."

If you use an Android phone or tablet, you can subscribe to the Pitpass Podcast () to automatically download each new episode. Here.