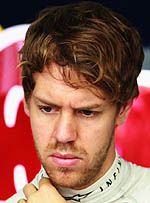 Sebastian Vettel was left frustrated by Narain Karthikeyan after he felt the Indian driver impeded him during the United States Grand Prix.

It's not for the first time the pair have clashed in 2012, Vettel branding the HRT a 'cucumber' after tripping over him at the Malaysian Grand Prix. This time however Vettel feels aggrieved that Karthikeyan's actions cost him a shot at winning the Grand Prix.

Leading in the closing stages but under increasing pressure from a pursuing Lewis Hamilton, Vettel was baulked by Karthikeyan, thereby allowing Hamilton to close in just before the DRS detection zone. On the following straight Hamilton made short work of the Red Bull driver to take the lead.

Vettel could subsequently he heard shouting to his pit crew about the move, many believing the German was referring to Hamilton's pass, which saw the two rivals come within a cigarette paper of one another, however, the German was actually raging about the Indian's driving.

"I wasn't too happy to send a nice big invitation to Lewis when I had to go through Karthikeyan," Vettel admitted after the race. "Hamilton took that opportunity, fair enough, down the straight and he passed me.

"I tried to defend but I knew he would have so much more speed," he added. "I was obviously not happy."

"When I finally got close to him I seemed to be catching him in the first sector and that was difficult," he continued. "Then the backmarkers came in to play, finally. How many times has it happened to me when I got caught out (by backmarkers)? But this time it worked out and I knew that was going to be the lap.

"I turned the engine up to maximise the revs and went for the inside, but he defended, so I went to the outside and he closed the door a bit, so I was very lucky."

Shortly after crossing the line Red Bull boss Christian Horner radioed his driver offering his commiserations. "Well done Seb," encouraged Horner, "that wasn't your fault." The team had earlier been forced to calm its young steed, "we saw that but keep your focus on the job in hand," pleaded the German's engineer.

Despite losing the lead, Vettel still extended his championship advantage over Fernando Alonso by three points courtesy of his second place finish. The German now heads the title fight by thirteen points from Alonso with just this weekend's Brazilian Grand Prix remaining.