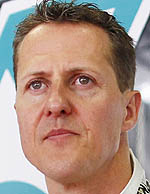 Race stewards have announced that they will take no further action after Michael Schumacher appeared to ignore numerous blue flags during today's Indian Grand Prix.

Following a first lap collision with Jean-Eric Vergne which necessitated a pit stop for both drivers and dropped Schumacher to the back of the field, the German soon found himself being lapped by the leaders.

While a number of drivers complained of being held up by the seven-time champ - who has probably never even seen a blue flag before today - it was the incident involving Romain Grosjean that the stewards looked into.

Investigating a possible breach of Article 20.5 of the FIA Formula One Sporting Regulations, the stewards, who included world champion Alan Jones, eventually ruled that Grosjean did not close the gap to Schumacher sufficiently to require him to move out of the way in accordance with Appendix H Article 2.4.5.1(d) of the International Sporting Code.