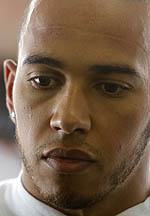 It proved to be a disappointing one hundredth Grand Prix for Lewis Hamilton, the team opting to retire the car after fifty-six laps as a precaution after an early race puncture. However, while the Englishman ran down the order for most of the race he remained one of its key protagonists.

"These days if you run a car a lap with a flailing tyre you don't just damage bodywork but you put other stresses in to the gearbox," explained McLaren team boss Martin Whitmarsh." Given where we were at that point, it didn't look like there was a prospect of a Safety Car, taking an unnecessary risk was probably not a wise thing to do."

Hamilton subsequently stole the limelight by un-lapping himself from second placed Sebastian Vettel. Having just pitted for fresh rubber Hamilton trailed the Red Bull for some time before passing the German on lap thirty-five.

"That was not nice of him," Vettel said after the race. "I don't see the point why he's trying to race us. If he wants to go fast he can drop back, find a gap and go fast there. But it's a bit stupid to disturb the leaders."

"If that's stupid I don't know what else," laughed Whitmarsh. "He was quicker and he overtook and he pulled away. I'm not quite sure the stupidity in that but that's for others to comment on I suppose."

With Hamilton's teammate Jenson Button close behind the move had ramifications shortly after. The delay, although minimal, was enough to give Fernando Alonso breathing space heading in to his final pit stop. It also allowed Button to close sufficiently that a lightning stop by McLaren saw him jump the Red Bull into second place.

"We probably dropped about a second when Lewis un-lapped himself," claimed Red Bull boss Christian Horner.

"If you look at the rules there's nothing to say a car can't un-lap itself," he continued. "What's frustrating for us is it cost us a second and unfortunately he didn't un-lap himself from Fernando (Alonso) as well. If he'd have cost Fernando a second as well then it would have negated the disadvantage of being un-lapped."

Hamilton meanwhile didn't see what all the fuss was about. "My second lap puncture was incredibly unfortunate," he said after the race. "At least I was able to have some fun out on track - my pace was good enough to be able to match the leaders during the middle stint.

"We'll put that pace in our pockets and take it to Hungary next weekend."