Sid Watkins' memoirs on the way 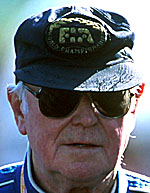 Although Bernie Ecclestone gets most of the credit for having made Formula One what it is today there is one person he really couldn't have done without. That person is F1's former medical delegate Sid Watkins who quite literally transformed the sport's safety record following the deaths of Ayrton Senna and Roland Ratzenberger in 1994. If F1 had not improved its safety standards it would most probably not be here today. Much has been written about the improvements made by F1 but Sid Watkins' own journey through the sport has never been told in detail. That is all about to change.

Pitpass' business editor Christian Sylt is a family friend of Sid and his wife Susan and they frequently meet for dinner at the Athenaeum club on London's Pall Mall. At a recent meeting Sid revealed that he is working on his memoirs which should be out by Christmas and will cover both his life in F1 as well as his career as one of Britain's top neurosurgeons.

His previous books, Life at the Limit and Beyond the Limit, touched on some of the colourful characters in F1 but the new book will lift the lid even further. There are few other people who can match Watkins' experience in F1. Not only has he known Ecclestone for over 30 years but he was also a close friend of his father Sidney. Through his position in the sport Watkins has had a unique relationship with F1's biggest stars and Sylt says the book will be packed with colourful tales such as how he used to go on fishing trips in Brazil with Senna who would personally give the fish he caught to residents of the nearby slums.

Regular Pitpass' readers will know that at the end of 2010 Susan released a biography of Ecclestone which contains unrivalled personal insight into him as well as extensive detail of his business dealings which was provided by Sylt, who also proofread the book. Susan too has a new work on the way but its content is far removed from F1. Instead, she has written a stirring script for a play about the true story of a plastic surgeon who had a unique way of rehabilitating severely burned and disfigured Battle of Britain pilots during the 1940s. The play's first run will begin in the Autumn and a major studio is believed to be eyeing the movie rights.

Sid's story too may get a screen adaptation but it is understood that this would be for television. It is unknown who would be cast to play him but one thing that's for sure is they will have big boots to fill.