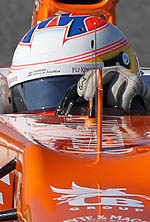 The absence of coverage of either Force India driver would appear to some to be a childish response from Formula One Management to the team's decision not to take part in Friday's second practice session.

On Wednesday a Molotov cocktail exploded near a van carrying Force India mechanics. Although nobody was injured it prompted one team member to return to the UK. A similar incident affected a mini-bus carrying Sauber mechanics on Thursday.

Force India has been the only team to take any sort of stance amid the deafening silence that's emanated from the Formula One paddock in Bahrain.

On Friday the team opted not to take part in the final practice session so it could leave the circuit before darkness fell. It sent a clear message that the team is not comfortable in Bahrain and clearly antagonised Bernie Ecclestone.

Formula One Management's apparent response, to deny the team any television coverage, ultimately backfired. Television commentators made mention of the team's invisibility as the session unfolded while Force India trended on Twitter as observers also pointed the fact out via the social network. By failing to give the team any coverage Formula One Management instead raised the team's profile.

For the record Paul Di Resta will start tomorrow's Bahrain Grand Prix in tenth, after electing not to set a time in the final phase of qualifying. He lines up ahead of teammate Nico Hulkenberg, who dropped out of the second phase of qualifying after setting the thirteenth fastest time.

It's expected the blanket avoidance of Force India will continue in to tomorrow's race as the team is punished for its 'insubordination'.