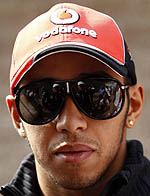 After the annus horribilis that was 2011, Lewis Hamilton says he is fully focussed on the season ahead and feeling stronger than ever.

While there was a considerable amount of media hyperbole last season, one has to admit that there were times when one feared for the McLaren driver. Be it his obvious frustration with the authorities, his numerous clashes on track, particularly with Felipe Massa, the ups and downs of his private life and the ever improving form of his teammate, the Stevenage Rocket was under pressure, and the first to admit it.

Now, just days ahead of a new season, a season in which he will have to dig deep to banish the nightmares of 2011, he insists that he is in a good place and ready for the fight ahead.

"Every time I go through the gates when I get to the circuit, it is always a great feeling," he told The Guardian. "I would definitely say that sometimes last year I did not have such a great feeling.

"Maybe you have not come from such a great race," he continued, "but this is a new year, a new chapter and a new chance ahead. It is an exciting time.

"This year I have focused on my relationship with the team, my mechanics and my group of people who I have put together, and making sure I am fit and healthy. This is what matters. Last year has no bearing on me. I don't care about last year.

"You have to keep your eye on the ball and stay focused during training and not waste energy," said the Englishman. "I was massively disciplined in 2006 and 2007. It is not necessarily that I lost that discipline, but now it's back more to what it used to be. It is all about sacrifices. It is about the travelling you do and the decisions you make, and the things you want to do with your life."

Bernie Ecclestone claims that Hamilton had been mesmerised by the celebrity lifestyle, and while the McLaren driver wasn't willing to comment on that he did admit that there were times his social life took precedence over work.

"I sacrifice things, like if I get a call from a friend who says: 'Do you want to go out tonight?' and it is before a race weekend or when the season starts, instead of saying: 'Yeah, let's go out and do it,' I'll be staying at home and training the next day. That's the sacrifice you need to make in Formula One. Last year there were quite a few times when I went out and enjoyed myself, thinking: 'These things don't affect you.' But they do. It takes two days to recover and then you have missed two days of training, and your thoughts are somewhere else after that."

Referring to the fact that for the first time in his F1 career he was eclipsed by a teammate, Hamilton said: "It didn't bother me. If it was a case that we had both been very close over the year and I had lost it when it was fiercely competitive, I guess it would have been quite tough. But it was a year where I was throwing away points and making silly mistakes. Sometimes I was a little unfortunate, but it was a shocking year and I was not too devastated by it.

"You have to draw a line under it," he added. "At the end of the day, he did not win the world championship. If he had it would have been even worse. But there are still many years ahead and I do not plan on that being the case this year. I am in a good place and Vettel is not invincible."