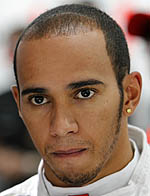 Sebastian Vettel, Lewis Hamilton and Bruno Senna were all the victims of gearbox woes during today's race.

Plagued by gearbox problems throughout most of the Brazilian Grand Prix, Christian Horner has revealed the team did not expect Sebastian Vettel to reach the finish, much less to do so in second place.

Battling falling oil pressure in the gearbox the team spotted the problem early on in the 71-lap race. "From as early as lap five, we could see gearbox oil levels starting to drop," Horner revealed to reporters after the race. At that point the situation was dire, with the team predicting the German would be forced out of the race as the problem grew progressively worse. "The early predictions were that it might get to half distance, so we monitored it for a couple of laps and then we could see a consistent pattern," continued Horner. "We informed Sebastian and he then started to try and manage the problem by adjusting his driving style."

Conceding the lead to teammate Mark Webber, Vettel's focus then turned to nursing his car home and consolidating a 1-2 for the team. However there were more nervous moments as Jenson Button began closing fast in the final stages.

"We were glued to the data and the screen, just to see if he was going to make it to the end. But that was a very mature and measured drive with strong communication from his engineering team to help him nurse it to the end," Horner explained.

"There must be zero oil left in that gearbox because it literally went off the scale in those last five laps."

Gearbox gremlins also affected Lewis Hamilton, the McLaren driver having to retire mid-way through as he lined up to pass Felipe Massa. The Englishman later revealed that the problems had begun early before becoming catastrophic on lap 37. "The gearbox stopped having good shifts from quite early on and so that's why every time we came out of the corners people just pulled away from me. It was a really, really slow gearshift, so it was almost like I was doing it manually myself."

Further down the order Bruno Senna struggled with his gearbox, the Renault losing fourth gear while battling with Rubens Barrichello. Senna had earlier clashed with Michael Schumacher for which the Brazilian was handed a drive-through penalty after his front wing punctured one of the German's rear tyres.

"The overall feeling is one of disappointment," Senna said after the race. "I started the race in a healthy position on the grid and I was hoping to capitalise on that. There were many difficulties preventing us from having a better race, namely the incident with Michael and the gearbox problems. I would love to have given my home fans something to smile about, but unfortunately it was not to be." Senna eventually finished two laps behind race winner Mark Webber in seventeenth place.