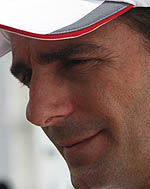 HRT has announced that it has signed Spanish veteran Pedro de la Rosa to lead its team next season.

After its recent technical announcements and with new headquarters established in Spain, HRT has announced its agreement with the Barcelona driver, a long desired target and a fundamental pillar for the team in its renewed project, which began in July after Thesan Capital acquired the team.

De la Rosa will join the team in January for two years. The alliance was possible thanks to the interest of all the parties involved; although in the end it was the support of his current team, McLaren, which enabled the deal to come through.

"This is a very important step in my sporting career and one of the most meditated ones I've taken," said de la Rosa. "I'm at a very good stage in terms of maturity and am prepared to take on this challenge, which motivates me hugely. When deciding on joining this project, for me there were three decisive factors: my desire to return to the active competition, the fact that HRT is a Spanish team and getting to know the people leading this project, Luis Perez-Sala being amongst them. I'm here to work hard, with modesty and humility, accepting where we are now but keeping in mind where we want to be in 2 years time. For me, this is the time to put into practice everything that I have learnt over the years at international top level racing teams so that we can grow together. I am proud that Spain has an F1 team and that I have this opportunity to be its driver. I can only show my gratitude towards HRT for having trusted in me for t his. Lastly, I can't forget to thank McLaren for allowing me to take this step. I have been very happy over the eight seasons I spent with them, growing as a driver and person. Without them I wouldn't be here today."

"The team's objective has always been to reinforce itself in every aspect," added team boss Colin Kolles, "economically, technically and in a sporting aspect. Without a doubt, the addition of Pedro de la Rosa for next year will be a fundamental foundation in the development of our project. We are a young team that needs to continue progressing and with this incorporation I am convinced that we will do just that. Apart from being a great person he is an experienced driver as his career and prestige in Formula 1 prove. I give him my most sincere welcome. I am sure that he will adapt perfectly and that together we will achieve great things."

"We have been working very hard for months on next season with the aim of making HRT F1 Team a more stable, competitive and reliable team and, little by little, this hard work is paying off," said Luis Perez-Sala, HRT Sports Advisor. "Having Pedro on board for this project is great news and with his ability and experience we are sure that we can take an important stride. I would like to thank Pedro for his trust and Vodafone McLaren Mercedes for its predisposition to reach a positive agreement for everybody."