Briatore: No electric engines in F1 for 50 years 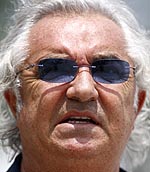 As Pitpass exclusively revealed yesterday, electric engines will not be used to power F1 cars in the pitlane from 2014 as expected.

F1's boss Bernie Ecclestone is resolutely opposed to the idea and told Pitpass' business editor Christian Sylt that "there's no way it will be electric in the pitlane." The lack of noise could be a safety hazard and may also drive fans away. It would certainly fundamentally change F1's offering to spectators and not necessarily be for the better. Ecclestone is by far and away not the only one who can't see the point in it.

Former Renault F1 boss Flavio Briatore said to Sylt that he believes "no noise is not very exciting for the people. Formula One is not the place to have electric engines. Maybe in 50 years." His argument is based on a concern for F1's customers - the fans - and it comes as a refreshing change given some of the recent comments made by teams endorsing the BBC-Sky Sports UK television deal.

"People stay seven or eight hours in the grandstands. These people are fantastic," says Briatore. He adds that the distinctive noise made by F1's engines "is part of the emotion, it's part of the energy. Take away the excitement and the noise and there is not much left."

As Pitpass has also revealed, 17 of F1's race promoters have threatened to drop the sport if the 2014 engine sounds different to the current model in any way. We understand that the promoters have not lost any of their resolve and will soon make that very clear.