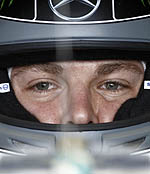 Another weather-affected day at Silverstone led to a tricky qualifying session today for the British Grand Prix with Nico Rosberg and Michael Schumacher qualifying in ninth and 13th places respectively.

Nico Rosberg: "We have made good progress with our technical package this weekend, but P9 is not the best that we could have achieved today. At the end of Q2, I was in fifth place, but on my final lap in Q3, the track was wet in turn 15 and I just couldn't improve in that final sector. With the pace of the car, hopefully we can make up some places in the race tomorrow."

Michael Schumacher: "Qualifying did not go totally right today but I am not frustrated as I know the reason why. Owing to the uncertain weather situation, and in order to not risk driving in the rain, we went out rather early, which simply turned out to be too early. On my last lap, the tyres were unfortunately already gone and, especially in turn six, I suffered understeer which cost me the time to make it into the top ten. It did not have anything to do with the gearbox issue we experienced this morning. Let's see what can be possible now coming from P13 and having some fresh tyres available - maybe some rain could help."

Ross Brawn: "We have had very limited dry running with our new aerodynamic package this weekend, as well as having to come to terms with the change in engine strategies. Rain in the final sector prevented Nico from achieving a better lap time at the end of Q3, which would have made a reasonable difference to our starting position. Michael lost out by less than seven-hundredths in a very close battle in Q2, but it was a patchy qualifying session during which we didn't catch the track at the right times. Today was the first step in utilising the new exhaust designs and technologies, and we are still finding our way."

Norbert Haug: "Nico posted his fastest Q3 time on a set of used option tyres which had completed an out-lap earlier in the session, and was considerably quicker with his new options in the first two sectors of his final attempt. His two split times were good enough to suggest he could have finished P5, but he had to abort the lap in the last sector because of rain. Michael missed out on Q3 by less than a tenth of a second. Starting from ninth and 13th places on the grid, we did not achieve the maximum possible today, but nevertheless we will fight for better results tomorrow."

To check out our Silverstone qualifying gallery, click here.