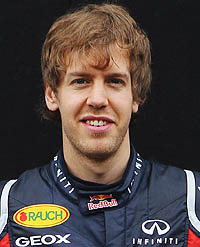 Sebastian Vettel: It's difficult to describe today; it's a great feeling. I've seen what it takes to win here. Today it was a crazy race. It's difficult to imagine you can one-stop at this race, but that's more or less what we did. Our first pit stop was not spot on and we lost the position to Jenson. I was surprised when Jenson came in and we had to react, he was pulling away on the soft tyres while I was on the hard tyres. I thought 'don't give up' and kept pushing to close the gap. The safety car helped us, but it was no walk in the park to do roughly 60 laps on the same set of tyres - our estimation was not allowing that! We took a lot of risks, but that made today's win even sweeter. Towards the end of the race the tyres I had were nowhere close to fresh - but I saw the only way to win the race was to stay out. I had 20 laps where I was under pressure from Fernando and Jenson, it would have been a difficult final six laps, but there was another safety car and a suspended race, so we were able to change the tyres. I'm extremely happy. At some stage I was in P2 and 15 seconds behind Jenson, so victory seemed far away, but it's a crazy place here. I think the roulette was spun last night and kept on spinning during this race. I'm really, really happy. A fantastic result and a huge honour to put my name on the list of Monaco race winners. We fully deserved this win, we took the risk and we got the reward.

Mark Webber: We didn't really go long enough on the first stint, which is normal for me on these tyres, so that compromised me. When I arrived in the pits we didn't have any tyres out, I arrived and sat there, but the boys were still getting them ready. There was a radio communication problem within the team and so they weren't properly prepared. When you wait here, you lose track position and you have to wait behind people, so it was not bad to get fourth from there. I don't know why we restarted the race when there were only five laps left - but that was the decision and it turned out okay. I hope Vitaly is okay.

Christian Horner, Team Principal: A phenomenal drive by Sebastian today. We had a communication problem with the first stop, which affected both drivers as they were both stopping on the same lap. It delayed Sebastian, but we managed to re-adjust our strategy. We didn't panic and managed to engineer ourselves out of the situation to get him back into the lead. He then had an awfully long way to go on the harder tyre, which he made work. He soaked up huge pressure from Fernando and Jenson and then our hearts were in our mouths when the accident happened just in front of him. But he picked his way through that and, with the benefit of the option tyre, was able to have a bit more comfort in the remaining laps after the re-start. It was a classy drive from Sebastian today and a tremendous team performance to recover from what looked to be a difficult first stop to win the race. At one stage Mark was 15th after the first round of stops, but he never gave up and kept on pushing through. He pulled a great move on Kobayashi on the last couple of laps who's not an easy guy to pass and it was a shame not to have him on the podium today, as he deserved to be there.

Cyril Dumont, Renault: Once again it was a really good result for Sebastian and it could be worse for the start of the season - five out of six wins! I don't know where we have to go back to, to see these kind of results. Regarding Mark, it was a bit chaotic in the first pit stop, but it was a great recovery and nice to see him finish fourth. It's hard to overtake on this track, but he did it. Overall we had a great result this weekend, we scored more points than our opponents and it's a great start to the season.

To check out our Monaco GP gallery, click here.