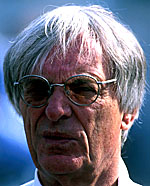 Having been invited to lunch with Bernie Ecclestone on Tuesday, Pitpass business editor Chris Sylt asked editor (in chief???) Chris Balfe if he had any questions for the F1 supremo.

In no time at all, Balfe had produced several hundred questions, among them the following: F1 cannot garner the passion and interest of football. Why is this and might there be a time when F1 could incite such passion?

On Wednesday night, Liverpool were beaten in an FA Cup replay by Reading just days after the mighty Manchester United were dumped by League One team Leeds United. Indeed, that very night QPR - owned by Ecclestone and good mate Flavio Briatore - went out of the FA Cup to Sheffield United.

In the case of Liverpool and Manchester United, big teams were eliminated from a prestigious tournament by relative minnows, and it is these acts giant killing that not only makes the FA Cup what it is, but what football is all about. It is the fact that one can never really predict what is going to happen in a match for the destiny rests with its participants, the players and, to a lesser extent the referee plus a little bit of magic from Lady Luck.

For the most part, the rules of football are straightforward and, like many other sports, have remained relatively untouched for as long as anyone can remember.

For some reason however, those that run Formula One - a sport which according to Sylt's Formula Money has seen six car manufacturers invest £3.9bn in the last five years alone - continually tinker with the rules, an endless programme aimed, so they tell us, at improving the show.

Football doesn't require a Goal Scoring Group, a board of 'experts' whose job it is to find a way for more goals to be scored, yet F1 has an Overtaking Working Group the aim of which is to increase the amount of overtaking. At the same time, Ecclestone comes up with ever sillier ideas to make F1 better be it changes to the points system, a medals based championship or even reversed grids.

However, his latest brainwave is perhaps the silliest of the lot. The F1 supremo, in his desperation to see more overtaking is suggesting that tracks should feature shortcuts which would allow drivers to overtake their rivals.

"I've tried to push the teams with a number of proposals," he told reporters during a surprise visit to Ferrari's media get together in the Dolomites yesterday. “It would be very easy for us, on each circuit, to have an area where you could gain a lot of time, so you could overtake. A shortcut if you like, which a driver can use five times during a race, so it will stop people getting stuck behind somebody.

"It would be great for TV and good for commentators, who would talk about one driver with three short cuts left and another with two," he added.”

Ignoring the fact that most commentators find it hard enough to keep track as it is - no pun intended - one has to ask what the casual fan or newcomer might think of such an idea.

It wasn't that long ago that Ecclestone and Mosley were telling us that in reality there hadn't really been that much overtaking in the past, indeed, the former FIA president told us that pit stop strategy was the thing that really got fans excited.

The fact is that we do tend to remember those iconic overtaking manoeuvres, forgetting the many races - even during the golden era - that were essentially cars going round and round and round. However, the fact remains that it is the modern aerodynamic regulations that prevent drivers overtaking these days, not to mention a points system - again introduced to manipulate the championship - that encourages drivers to hold station rather than going for it and Mickey Mouse tracks more about status, glitz and glamour than racing.

If at half-time during a QPR game, over a Bovril and warm pie, Ecclestone was to tell a group of QPR fans his ideas for spicing up football we have no doubt that they would soon tell him where to stick his little gimmick.

F1 fans, the teams and drivers should do likewise.