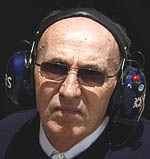 Despite rumours linking his team with Renault power-plants for 2010, Frank Williams has revealed that that he has struck a deal with the company that powered his outfit to its first victory, Cosworth.

Speaking in Abu Dhabi, ahead of this weekend's season finale, a year which has seen him team enjoy one of its best seasons in years, the F1 veteran has confirmed that the FW32 will be powered by a Cosworth engine.

"We've finished our contract with Toyota and we've moved on to a British engine manufacturer Cosworth with whom we have won many world championships in the past," he told Gulf News.

"They are 50 miles away from Williams which is very convenient," he continued. "Besides we also like our independence. We will be not under the influence, not that Toyota ever bossed around, but we've just gone a private and independent route."

As far as drivers are concerned, Williams added: "We will announce our drivers for next season on Monday.

"Nico will be leaving," he continued, confirming what the German had told reporters earlier in the day. "We just thought it was quite a long time."

It is widely expected that on Monday Williams will confirm Rubens Barrichello and Nico Hulkenberg.

When Williams first entered F1 as a constructor in its own right, in 1978, it was the legendary Cosworth which powered the FW06. A year later, Clay Regazzoni scored the team's first Grand Prix victory, while in 1980 the British outfit - still powered by Cosworth - scored the first of its 9 constructors' titles.