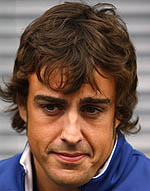 In the face of continued speculation over Fernando Alonso joining Ferrari in 2010, when it was announced that the Spaniard would visit his hometown of Oviedo with the Renault Roadshow, just days before the Italian Grand Prix, it was assumed that this was a sure sign that official confirmation of the Maranello move was imminent.

Historically, Ferrari likes to use the Italian Grand Prix as its weekend, a time to make announcements, to welcome new faces and bid farewell to others.

However, with Renault now facing an extraordinary meeting of the World Motor Sport Council as a result of claims that the French team fixed the result of the 2008 Singapore GP by ordering Nelson Piquet to crash, thereby effectively handing the race victory to Alonso, one has to wonder whether any announcements regarding the Spaniard's future will be put on hold until after the hearing on September 21.

Indeed, if Alonso is implicated in the alleged plot, it could put the Ferrari move in jeopardy.

Meanwhile, the Spanish media reports that Flavio Briatore and Pat Symonds have written to the FIA vehemently denying claims that Piquet was ordered to deliberately crash in return for a renewal of his contract.