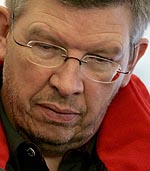 Despite the fact that the clock is ticking, Honda team boss Ross Brawn remains confident that a deal will be done in time to save the Brackley squad.

Talking to Gazzetta dello Sport the Englishman also confirmed that he has already approached his former employers (Ferrari) in the hope that the Italian company will provide powerplants.

"I'm really optimistic," said Brawn when asked about the outlook for the team. That said, he refused to be drawn on the identity of the prospective bidders(s), merely saying: "I can only say it's more than one.

"The objective is to save the jobs," he added, "my presence is certainly not a priority."

However, only a fool would want the team without Brawn, the Englishman having proved his (title-winning) worth with Benetton and then Ferrari.

With regards the Maranello team, Brawn admitted that he had already had discussions about an engine supply.

"Honda has already said it will not supply us with engines, so that's why I contacted Ferrari," he said. "We haven't signed anything yet but I really appreciated the support from president Luca di Montezemolo and Stefano Domenicali. It's like being among former schoolmates: they still see me as one of their own.

"There's no hurry," he continued, referring to the need to have an engine supplier on board as soon as possible, "because modifying the car to install a different engine requires at least six weeks of work anyway.

"It's unlikely we'll manage to be on track during the winter," he continued. "That's why we are studying a package of evolutions for 2010, when we aim to step up the ladder. Next year will remain for us a transitional one."

The Ferrari move is a no-brainer, and some sources claim that talks have been on-going for a lot longer than some would have us believe.

Finally, the Englishman cleared up any lingering speculation regarding Mexican billionaire Carlos Slim.

"The gentleman never visited us and didn't show any intention of buying the team either," said Brawn.