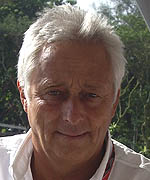 Lots has been said and written about Lewis Hamilton's driving tactics post-Fuji. Forget the likes of you and I; if Lewis's colleagues are up in arms, then we sit up and take notice. Criticism allegedly came from Mark Webber, both Toyota drivers, Kimi Raikkonen and Felipe Massa and maybe others.

So Thursday's press conference was awaited with interest. It was a bit quiet, but still pretty electric with lots of reading between the lines to establish that Lewis couldn't expect a lot of help from his colleagues, and that he wasn't much favoured. OK, so we might have to wait until the drivers' briefing on Friday evening for the real big guns to come out, but even that came and went without a lot of table-banging.

Everyone, it seems, has calmed down. Of course, just one or two incidents will ignite that criticism again, but let's look at the reasons for all of this. There is a certain amount of establishing one's space in Formula One, and Hamilton is currently doing that, just as Michael Schumacher and Ayrton Senna did with similar results. Lewis certainly isn't the most popular guy in the field for flexing his muscles.

Let's put this hypothetically. As a boy you are told you have joined the best team, you can see that in their history they have won many races, many championships. You are obviously impressed. As you progress through your motor sport you are placed in the most competitive teams, and you respond by performing to your best ability, which brings results.

When you get into Formula One you have one of the top cars, you are told the team has the best mechanics, household name blue chip sponsors paying top whack, expecting exceptional service from top people in their field. You are told you are working with top quality training equipment, the road car manufacturer behind you is supplying you with a top level engine - and road cars, of course. The team's simulation equipment is like no one else's, the team spends more time than anyone else setting up and preparing the cars.

Apart from giving you a warm feeling, it tends to make you up your game to match all those expectations. Your self-belief, your confidence rockets, you get success, you get that 'walking on water' feeling. You go for gaps that you believe will just open up for you - and sometimes they do. You know that you have to keep your feet on the ground, to try and be normal but it's hard at an impressionable age.

You listen to the philosophies of those around you. They guide you, have the experience of the sport and of life. They have given you the opportunity to be the best, and again you put pressure on yourself to come up to those expectations. Sometimes it all goes wrong, but like the best political spin doctors, you are told to draw a line under the disasters and move on as quickly as possible. Don't dwell on these things, be positive, you are better than that.

The team cossets you. They protect you from the normal ravages of life. You are treated like a VIP, a celebrity. You are no longer normal, even though you may actually seek a normal life. Sometimes they make you do ridiculous things - again, everyone draws a line and moves on, swearing never to be hoodwinked into that again. Generally speaking though, you and they seem to be a class above everyone else, they do everything - how can you put it? - differently. So you don't necessarily play to the same agenda, either on track or off.

Of course, I'm not saying that that is how it is for Lewis chez McLaren - but you might imagine some similarities. It might make him a different kind of person. But then he's not in Formula One to make friends, although I feel that he is a naturally nice guy. He seems prepared to take that flak, if that's what it takes to become the best in the field. Along the way he will be penalised, he will attract the attention of his competitors, he may make lasting enemies, but the final goal is that he will come out the best.

Similarly, we can look at some recent racing antics as being excessive, and not just Lewis's. Take Felipe Massa in Japan. He was involved in several incidents. He found himself sandwiched by cars at the first corner and had to take avoiding action; Hamilton was later penalised for his first corner antics. Massa then tried an over-ambitious manoeuvre trying to overtake Hamilton on the kerbs on lap two for which he was penalised.

On lap 50, Bourdais rejoined behind Massa after a pit stop but tried to brake late into the first corner and hit Massa spinning him around. For this Bourdais was penalised. And finally, on lap 65, Massa overtook Webber for the second time in what seemed like a hairy manoeuvre down the main straight, with Webber squeezing Massa over to the right as far as possible until he realised it was futile - for which neither of them was penalised.

During the last five years I've watched racing from karting to Grands Prix, Caterhams to Le Mans, Formula Ford to A1 etc etc. In particular, I spent four years watching karts, watching kids of various ages - and adults - racing wheel to wheel at speeds up to 80mph in relatively unprotected machines.

This is where today's Grand Prix drivers cut their teeth. It's where tomorrow's Grand Prix drivers are cutting theirs. Tomorrow's racers are watching Felipe Massa being squeezed almost onto the grass - remember almost - and filing that under 'possible.' They're also filing 'trying to squeeze inside another driver on the kerb' in the 'impossible' section.