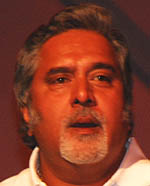 As has been documented elsewhere, it is believed that there are increasing problems at Force India, in terms of an ever growing chasm between some of the principal players within the Silverstone-based outfit.

However, we hear rumours also that all is not well financially, with some claiming that Vijay Mallya is only now coming to terms with what it really costs not only to run an F1 operation but to make it competitive.

According to sources, while Mallya has kept to his word and invested money in the team, the cash has been unwisely spent, with much of it channelled into the team's image as it seeks to make up for its lack of success on-track by hosting the biggest parties in the most lavish surroundings. Furthermore, there is talk of the team paying certain members of staff far more than they would receive at other teams, and for little return in terms of results.

While Mallya was adamant that he was serious about F1, it should be noted that the fuel cost crisis which is damaging so many airlines, will also be hitting Kingfisher hard, further denting his fortune.

With no points from twelve races, and the season highlight - other than Sutil's near-miss in Monaco - being Giancarlo Fisichella's 10th at Barcelona, it remains to be seen how much longer things will continue before the Indian billionaire starts having second thoughts. Will Force India suffer the same fate as Jordan, Midland and Spyker?