Raikkonen: "The most difficult weekend of the year" 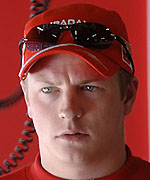 "I left Germany after a race weekend with the same feeling I had many times in the past," writes Kimi Raikkonen in his latest blog for Ferrari. "The best thing is that the weekend is over. It was certainly the most difficult weekend of the year: a horrible Friday, an even more complicated Saturday and a very bad Sunday. During the tests the week before the car went pretty well, at least that was the feeling we got. In the race it seemed as we were in a different place. We never managed to find a good set up and the car had absolutely no stability. You need good grip to drive good lap times at Hockenheim, but the rear went all over the place for the whole race. It's true that we had some problems at the beginning of the season to set up the car as I wanted, but we never had problems like we had at Hockenheim. When you're lacking grip in the rear you can't go fast enough to fight for the top positions. For a couple of laps, especially in the end, the situation seemed to improve a bit, but it never went as it should have.

"Usually we have our biggest problems in qualifying," he continues, "but we're never short on pace in the race: this time we were. The temperatures were slightly higher on Sunday than the days before, but that didn't help either. Quite the opposite actually. At the beginning of the race we were especially in trouble: I drove consistent lap times, but I was too slow. At the first pit stop we changed to the soft compound and the situation improved slightly. Then the safety car came out, which didn't help me at all. We lost some time during the double pit stop and I lost some positions in the field. I managed to overtake some cars and at least I gained some points at this really difficult weekend.

"It's obvious that the situation has changed. I'm seven points behind in the standings, as I was after the Canadian GP. We have to check and analyze every single detail we've done during the preparations for Hockenheim and find out why we went so slowly, because there has to be something that didn't work properly. Sometimes these things happen, when you want to improve the car. I'm confident: we'll have a F2008 that can fight for the win again soon.

"As of today I'll be at Jerez de la Frontera for the private tests, where amongst other things I will test the slicks for 2009. The situation is quite complicated, but nothing is lost: We have to stay calm and react the way we know how to. The desire to win hasn't decreased at all: last year I had a period of six consecutive races without a success and the same things is happening this year. Let's hope that seven I my lucky number also this time and that I can get back to success immediately."