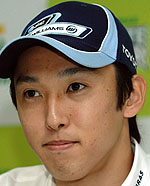 The marshals have been busy with their red flags this morning at Barcelona, as a three-day test gets underway.

Fifteen drivers representing ten teams are on duty, with Super Aguri not due to test again until later this month at Jerez, and Ferrari and Toyota in action at Sakhir from Monday.

Webber, Bourdais and Paffett each stopped out on track this morning, necessitating the red flags. However, there a far more serious incident at approximately 11.25 when Kazuki Nakajima crashed out at Turn 1.

His car went straight on at the first corner, where the gravel trap has been replaced by asphalt, as is the practice at most circuits these days.

Although the Japanese youngster was able to climb from the car unaided, there will be concern as to why the accident happened and why the car didn't lose speed as it headed towards the safety barriers.

The asphalting of the corner is one of a number of modifications carried out at the track ahead of the new season.

While there has been little action thus far, that hasn't appeared to bother the many thousands of fans lining the track cheering on Fernando Alonso, just 24-hours after his team launched its 2008 contender in Paris. It is thought that as many as 50,000 fans could attend this weekend's test.