Hamilton to speak to Alonso regarding Spa start 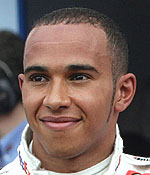 Clearly still unhappy with his teammate's start at Spa-Francorchamps, Lewis Hamilton has said that he will have words with Fernando Alonso ahead of this weekend's race in order that there is no 'silliness' and that the McLaren drivers don't end up taking one another out.

"I probably will speak to him about this because we haven't spoken since the last race and I have my feelings on what happened," Hamilton told reporters at Fuji Speedway today.

"If that is how aggressive he wants to be then I can be just as aggressive," he added, probably referring to his own "aggressive" start at Monza, just one week before the Spa incident.

"When we are out there we won't be giving any handouts, that is for sure," he continued. "I will be a lot more aware of him around me now. I am driving to keep the car on the track and be fair to everyone. But I am not going to take any silly risks and take myself or anyone else off. I'll just make sure I am ahead of him so it won't be an issue."

Having had his championship lead reduced to two points, Hamilton believes he is now back in control and aware where he has lost out in some of the recent races.

"I understand where I can find time and where I've been losing time," he said. "Usually Fernando and I have similar set-ups but at the last race we were miles apart and I didn't get it right.

"When we go to a race we have a very similar set-up, but at the last race I went somewhere else on my set-up, thinking it was the right way and we were wrong. And although I was not far off Alonso's times, I feel that if my set-up was a lot further in the other direction, it would have been a lot better. When you go through the Friday tests you haven't got much time to change the set-up or take big risks, so you are stuck in qualifying with what you have got. But I have a feeling that this weekend will be better than the previous few."