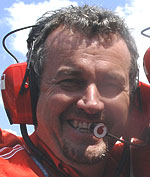 An Italian magistrate working on the Ferrari espionage case claims to have "reasonable proof" that there are grounds to continue a separate investigation into claims of sabotage involving Nigel Stepney.

It was the sabotage claim, subsequently followed by the espionage claim that produced the scandal that has rocked Formula One, overshadowing the on-track action for much of the summer.

Aside from the espionage saga, whereby Stepney is accused of passing 780 pages of documentation to McLaren's chief designer Mike Coughlan, Stepney has also been accused of interfering with the fuel in the Italian team's cars before the Monaco Grand Prix. It was claimed that white powder had been found near the cars, and it was this that first fuelled talk of sabotage.

Now, magistrate Giuseppe Tibis, who has led the investigation in Modena, claims to have "reasonable proof" of Stepney's involvement.

"We have reasonable proof that Stepney was involved in this," he said, according to The Guardian.

Tibis revealed that tests had been made on the powder, now thought to be detergent, found on one of the race cars fuel tanks and also on a pair of trousers taken from Stepney.

"We found powder in the fuel, while such a modest quantity was found on the trousers that I was concerned about destroying evidence and am asking for a further study to be undertaken by a judge," he said. "I will also ask the judge to assess the effect of the powder on the car engine and the car if it had driven."

Stepney's lawyer, Sonia Bartolini, has said she will be sending two experts to attend the hearing in order to prove the Englishman's innocence.

"Nigel believes he is the victim of a plot," she said.