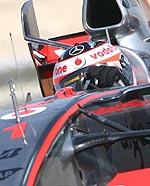 Ahead of the start of today's opening free practice session, the air temperature is 24 degrees C, while the track temperature is 35 degrees. It is bright, sunny and warm.

While many are wondering whether rookie sensation Lewis Hamilton can repeat his Montreal form here at Indianapolis, we cannot help but wonder whether another little bit of F1 history might be made this weekend.

As Sebastian Vettel steps in to the second BMW to replace Robert Kubica, who was involved in a horrific accident in last weekend's Canadian GP, we cannot help but think back to the last time a young German stepped in to replace a colleague. We refer, of course, to Spa Francorchamps 1991, when Michael Schumacher replaced Bertrand Gachot at Jordan.

The Belgian driver, unlike Kubica was not recovering from an accident, but rather spending time in one of Her Majesty's jails following an incident involving a London taxi driver and a can of CS gas.

The lights go green and first out is Sutil, followed by Albers, Schumacher, Trulli, Heidfeld, Davidson, Sato and the man (boy?) himself, Sebastian Vettel. Watching from the pit-wall is Timo Glock, who we understand is far from impressed that he didn't get the call to replace Kubica.

There's a first, for the first time this season Scott speed isn't complaining. Asked how the track feels, he replies; "to be honest, it doesn't seem too bad at all, it feels good". Even he seem surprised that he can find nothing to moan about.

Trulli, Schumacher and Nakajima are the first drivers to come out for a second run. After fifteen minutes the only drivers that haven't appeared are Massa, Raikkonen and Rosberg.

Trulli posts the first time of the weekend, the Italian crossing the line at 1:14.376. Moments later Schumacher posts 14.394 to go second.

At the back of the McLaren garage Ron Dennis appears to share a joke with Lewis Hamilton. God only knows what the media will read into that.

Trulli improves to 13.879 as Nakajima gradually gets down to 15.830. However, Schumacher goes quickest in the first sector, finally crossing the line at 13.819 to take the top spot. The German is under pressure to raise his game, as are the two Spyker drivers who have both been publicly criticised by the Dutch team.

Jenson Button is on track in the Honda, the Japanese team not expecting any significant improvements until Magny-Cours. Liuzzi and Vettel are also on track.

Twenty-three minutes into the session Hamilton heads down the pitlane, followed by Rosberg. Massa appears to be getting ready to go out in the Ferrari.

A 14.099 sees Vettel go third, as Hamilton goes quickest in the second sector. The Englishman crosses the line at 13.444 to take the top spot, having gone perilously close to the wall.

Next time around the World Championship leader improves to 13.143, leaving Schumacher almost 0.7s in his wake.

A 13.864 sees Nick Heidfeld go fourth, ahead of Trulli, Vettel and Speed. Elsewhere, Massa heads down the pitlane.

As Kovalainen goes eleventh, Rosberg gets all locked up in the infield.

Massa begins his first flying lap as Heidfeld goes second (13.504). The Brazilian goes fifth (13.927), as Raikkonen leaves the pits. Elsewhere, Hamilton makes a mistake and goes wide on to the grass. Moments later, Raikkonen makes a similar error having just gone sixth with a 13.955. The replay appears to show the car went straight on instead of turning in. Another replay show Hamilton locking up big time as he entered the pitlane.

Massa goes second (13.187), as teammate Raikkonen goes fourth. Alonso, like Sato, Webber and Fisichella, has yet to post a time.