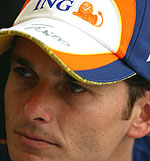 Maybe its the fresh sea air coming off the St Lawrence, or perhaps it's the strong showing in Monaco. Either way, ahead of the Canadian Grand Prix, Giancarlo Fisichella is the most optimistic he's appeared all season.

The Italian feels that some of the recent additions to the R27 have had a great impact, making the car far more 'predictable'.

"Especially with the new front suspension, the new front wing we had in Monaco, it's much more consistent now," says the Italian. "At the beginning of the season we were struggling with the consistency of the car and braking point in high speed corners. Now it looks much better."

The French team is one of several that has clearly had problems adapting to Bridgestone rubber, however, the Italian is confident that things are improving here too.

"The compound of the tyres is completely different than last year and they are lower than last year," he said. "But anyway I feel comfortable on those tyres. I just think we lost some time from Michelin to Bridgestone on the level of the car.

"But now we are going in the right direction and going better," he continued. "The car is working more consistently, especially in Monte Carlo with the new front wing.

Asked if the announcement that he is opening a racing school is an indicator that he is considering retirement, the Roman wasted no time in setting the record straight.

"I want to give back to people like me who love this sport, the opportunity to learn in that academy what they need to go higher," he replied, "to improve, to learn everything about this sport, so it's very nice.

"It doesn't mean anything about my retirement!" he continued. "I still want to go higher in Formula One, for many years. I've got a good staff who can look after my academy at the moment, I've got all my management, so I will just be concentrating on Formula One at the moment."