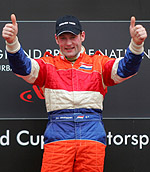 Jos Verstappen will again drive for A1 Team Netherlands in the upcoming season of the A1GP World Cup of Motorsport, which kicks off at Zandvoort on October 1.

It was a long wait, but finally there is the confirmation that the successful trio of Jos Verstappen, Huub Rothengatter and Jan Lammers agreed to join forces for the second season to conquer the 'World Cup of Motorsport'.

We all know Jos as a man of little words and lots of action. He is relieved that the negotiations have been concluded and racing will start again. Jos Verstappen; "I am very happy that we have closed the deal, for myself and the fans it is of course great that we will start the season in Zandvoort, next weekend, during the Ultimate Masters for a demo and then in October for the Series. We have all learned a lot last year and we can continue working with that. I hope I can reward the enthusiasm of the crowds with good results."

Jan Lammers of A1 Team Netherlands is also pleased that an agreement has been reached with Verstappen: "Continuity and stability are essential and the bright orange car with Jos behind the wheel proved the be a combination of success last year, you want to keep this and extend it further. Both behind the wheel as in front of the camera Jos’ behavior is pure and unpredictable. Jos is no media trained robot, but someone who is spontaneous and reacts straight from the heart. That makes him refreshing and interesting, but of course the main reason is that he can drive extremely fast!".

Before the real work kicks off on October 1, A1 Team Netherlands will see action a number of times in the Netherlands with a number of demonstrations. The first appearance is the BP Ultimate Masters on August 6 at Circuit Park Zandvoort. Verstappen has some fond memories of the circuit in the dunes. In 1992 he won the Masters of Formula 3 there, his stepping stone to the Formula 1.

After the Masters the team will be present for a demo on August 13 during the Rizla Racing Day at the TT-circuit in Assen. On August 20 Rotterdam will meet A1, when the racing cars drive right through the centre of the city on the Maas during Bavaria City Racing.