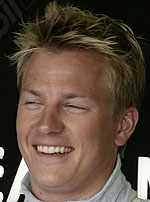 Following the shock signing of Fernando Alonso to McLaren in December 2005, there has been constant speculation as to who will partner the Spaniard next season.

Although some saw the Alonso/Raikkonen partnership as a dream team, there was speculation that the Finn would not stay, fearing that the Woking outfit would favour the World Champion.

Though he continued to be linked with the Woking team, there were soon noises linking Kimi with Ferrari, and another dream team partnership, this time with Michael Schumacher.

However, following Pitpass' comment that it was remarkable that drivers weren't forming a queue outside Renault's HQ, eager to get a seat with the team most likely to win back-to-back World Championship titles, the Finn's name was indeed linked with the French outfit.

With Michael Schumacher likely to remain with Ferrari, and, according to Pitpass' sources, not keen to have Kimi as a partner, the move to Renault seemed more likely. It was then that Pitpass heard that the French team had matched Ferrari's original financial offer to the Finn, dollar-for-dollar, a surprise move for the normally frugal outfit.

"It's no secret, Raikkonen is our priority for the 2007 season," he said. "We are talking with Raikkonen about a contract," he added, describing the Finn as "one of the greatest drivers".

The key to the driver market is Michael Schumacher, and all eyes are on the German to see whether he will remain in F1 in 2007, or even beyond.

Following a 'difficult' start to the season, many were predicting that the German would call it quits at the end of the season. However, as the season progressed, and Ferrari found its form, the German has demonstrated that the hunger - and the talent - remains.

However, could it be that the reason Schumacher is holding off on his decision is because he wants to see if he can win his eighth title this season, and therefore walk away from the sport at the very top. That would certainly explain the German's insistence on waiting until the Italian Grand Prix, in September, before making a decision. It would also explain why Raikkonen is equally reluctant to make a move.

Before Italy, there are three more races, more than enough time for Schumacher to form a realistic opinion as to whether the 2006 title is winnable.