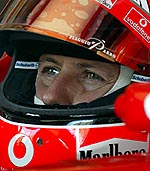 Michael Schumacher is itching to get back in his Ferrari for the Turkish Grand Prix so that he can kick-start his assault on the championship again.

"You're really eager to start driving again after a break. Many of the others may have needed this short break but if it had been up to me, I could have done without it. I'm happy to continue now. "

The multiple World Champion hopes that his skill at learning new circuits quickly will put him a step ahead of his rivals at the inaugural Turkish Grand Prix.

Getting to know Turkey

As Turkey is a new addition to the F1 calendar, the drivers have been getting to grips with the circuit in different ways.

As Pitpass previously revealed, Felipe Massa has been busy learning the track on his Playstation. He described the circuit as "not too bad", and is hoping the track, with its fast corners, elevation changes and long straights, suits him as well as it did in that particular race.

Giancarlo Fisichella was given DVDs of a road car doing laps of the track.

Jenson Button visited the circuit, and was "really impressed by the layout".

Championship contender, Kimi Raikonen, has not visited the track in any form, and nor has his McLaren team-mate, Juan Pablo Montoya, though both are looking forward to the challenge that a new track brings.

Fernando Alonso expects the race to be a hot one, and punishing on the brakes. He admits to being surprised by his car`s unreliability in Hungary, but points out that Renault are in a strong position, leading both championships.

Button backs Alonso for the title

Jenson Button has backed Fernando Alonso to win the championship comfortably over rival Kimi Raikkonen. The Spaniard currently has a lead of 26 points, and Button thinks this will be more than enough with just six races remaining.

Raikkonen has yet to give up on his championship chances. As far as he is concerned, "There are still six races with a maximum of 60 points to be won."

Even if Raikkonen wins all six races, Alonso will still win the title - as long as he scores a podium finish in each race.

It isn't all that cut and dried though, as Button admits; "Kimi's got the quicker car. I think that if McLaren don't win the championship, they have lost it more than Renault winning it."