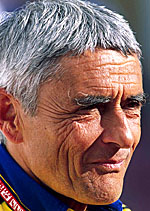 Michelin has apologized to Toyota star Ralf Schumacher for a mistake that has effectively killed off his hopes of a podium finish in this weekend's race.

The German will have a half-second penalty added to his aggregate qualifying time after scrutineers found that his car was using a tyre that hadn't was allocated to him.

"We have apologised," Michelin motorsport head Pierre Dupasquier told reporters in Monaco, "there are no excuses whatsoever.

"Please be sure that all our quality processes are straight and we do all we can to prevent stupidity like this, but sometimes it happens," he continued. "We should have done better."

It's understood that the error came about as a result of a new bar code system that the French tyre manufacturer is trying.

This is not the first incident involving Michelin's bar codes, at the recent test at Paul Ricard, Alex Wurz crashed heavily, badly damaging his McLaren. It was subsequently found that, due to a bar code error, one of his tyres was fitted the wrong way round.