Jean Todt on the Malaysian GP, the rebel teams and frustration 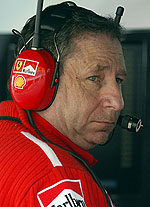 Having admitted, in his team's post-race press release, that "there can be no excuses," for his team's performance in the 2005 Malaysian Grand Prix, Jean Todt sat down to answer a few questions.

Asked if he feels the increasing pressure, the Frenchman sighed and replied: "It has merely increased our motivation to react.

"It would be wrong to say that we are satisfied with the situation," he continued. "I mean, it is not our standard and it is not what we want to do and simply we are not quick enough. So we have to see how to improve the situation by 360 degrees, the whole package is not performing how we want.

"The only thing I may say for those who thought that it was easy for Ferrari to win in the past… this shows that it was difficult, how difficult it is to be consistent in success and at the moment we are feeling that we are not good enough."

So what is the reason for the lack of performance? "There are a lot of reasons," he replies. "You know, I will say aero efficiency, not enough grip, on the car, and not enough traction, it all that works together and it makes a huge difference."

So is the F2005 the answer, will it make the difference? "No," he responds, "I am not confident. However, I am confident that we will do everything we can to improve the situation and you know the same goes for the drivers, engineers, and mechanics, there is the same motivation.

"t would be too convenient to say it was the worst race for us this season," he continues. "So, now, we must take this race as a point of reference. I think I should say of this race that it is where we are and from here we have to recover the situation. You know, even if we are a bit sleepy, it wakes us up and that is good."

Moving on, the nine 'rebel' teams have written to Ferrari president Luca di Montezemolo regarding his team's stance on cost cutting, in particular its refusal to go along with proposed cuts to the test programme.

"I have seen it," says Todt. "Its such an unnecessary situation that we didn't create. We would like to play with it but we will not play with it! It will not change our attitude at all, or our strategy.

"It is pointless to keep reminding us of the same things," he continues. "We proposed some adaptations to the testing. We feel unfair for the small teams because they don't save any money. We have been proposing a lot of actions to save money from next year, but they refused to come to the meeting. Then they plan to make a two day meeting in Italy to speak about the 2008 regulations which means taking over the FIA role. We are not going to get into that."

Can a solution be found?

"Honestly I don't care," he says. "I like quality rather than quantity and fortunately I have the quality around me which is good for me in my business, in my private life, and I think it will be my biggest asset. So to have some disagreements with some people it is part of life, you know. You cannot have unanimity around you in life. What is very important is that when you face yourself you feel comfortable and when we face ourselves, we feel comfortable.

Are the politics a distraction? "No," he replies without hesitation. "It is a distraction for them because they keep having meetings.

"We will focus on the real problem. The only thing that matters is that we are not competitive and that is all. We will get out of it. We will do it."

The teams claim that Ferrari has broken the Suzuka Agreement, is that correct? "No that is not true," he replies, again without hesitating. "We denounced it. And we wrote to everyone to inform them of it. There is no more agreement. They have made a new agreement and we are not part of it."

Looking ahead, what are your test plans and when do you envisage introducing the new car?

With regards the introduction of the new car, will Michael's opinion be the deciding factor? "It is a lot of things," he responds. "We are going to try to do something to act in this situation and to act in a proper way.