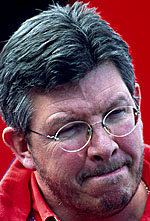 As nine of its rivals call on Ferrari to restrict its testing, technical director Ross Brawn has added to the controversy by claiming that teams such as McLaren running a third car in free practice is unfair.

McLaren boss Ron Dennis made a number of highly derisory comments about the Friday tests, referring to those participating as 'track sweepers.

However, in 2003, Renault, followed by BAR in 2004, took full advantage of the extra running, and used the extra mileage to great effect, moving up the championship table as a result.

Having finished outside the top 4 in 2004, McLaren was able to run a third car this season, and consequently the scheme's (former) biggest critic now found himself warming to the idea.

What with the new regulations, which restrict engine and tyre use, teams are able to use the third car - which has no such limits - to great effect.

Talking at the FIA press conference at Sepang today however, Brawn said that teams, such as McLaren, using a third car, was against the spirit of the game.

"I think it's a gross anomaly," he said. "It was originally intended to give some commercial benefit to the less well-off teams to enable them to sell a third car for a Friday.

"To have a team of the calibre of McLaren, or last year BAR, having the benefit of a third car on a Friday is a nonsense. And I don't agree with it."

Referring to the new regulations, he continued: "Particularly with these regulations that we have now it is a huge benefit. McLaren can run round with an engine that is not going to be used, and they can run a reasonable number of sets of tyres and it doesn't make any sense. I can't see the logic of it. To me it is just a piece of nonsense."

With McLaren one of nine teams calling on Ferrari to restrict its testing, and Brawn making it clear where he stands with regards the Woking outfit's use of a third car, it's clear that we're in for a long hot summer.

In the Friday sessions for the Australian and Malaysian events, between them the Ferrari drivers have clocked up 83 laps. Pedro de la Rosa, McLaren's third driver, has completed 93.