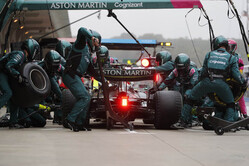 There's a popular saying in Formula 1 that the pits are where the races are won.

Today's super-fast pit stops are conducted by highly-trained teams that feature professionals who resemble athletes more than mechanics in their speed. However, things haven't always been this way.

Modern pit stops slowly evolved for years, resulting from a long road of innovations that are often overshadowed by racing cars. Each pit stop features a crew of up to 20 people standing motionless as the car races towards them at a terrifying speed and they burst into action, making several adjustments to the vehicle and changing its four tires in less than three seconds.

If any of the people present in the pit stop (including the driver) miss the mark by a few centimeters, the whole race and months of work could be destroyed faster than the race takes. That's why most crews train to record quick stops consistently instead of occasionally going blindingly fast. As such, punters who love betting on Formula 1 races with Betway sports betting might want to consider how long cars take at a pit stop.

In the early 20th century when car races were run in between two cities, the mechanics would ride with the drivers on the same vehicle. These mechanics would make the repairs by the roadside as necessary. However, when closed-circuit races became the norm, the pit stops changed.

Leicestershire's Donington Park hosted its first Grand Prix race in 1935. That was several years before the start of the Second World War and Adolf Hitler pumped lots of cash into Germany's teams Auto Union and Mercedes. Hitler wanted to show Germany's superiority by doing that and it helped to revolutionize pit stop technology.

In a 1937 race at Donington Park, British fans were highly anticipating the efficiency and precision of a Merc pit stop as they had heard about it but never thought it was possible. According to a New York Times correspondent who narrated the story, Von Brauchitsch stood on his brakes and the pit crew swarmed around it. The fuel was pressure-fed to the car's tank at a rate of five gallons per second, with the rear wheels removed and replaced with new ones all in a record time of 33 seconds.

That may not seem fast compared to modern pit stops, but German cars secured the top five places in this race, with the next closest car coming two laps behind. That's why Betway punters wagering on Formula 1 should consider the efficiency and speed of the pit stops when selecting the cars to bet on.

As the technology evolved, pit stops increasingly became faster over the years. However, the modern Formula 1 started stopping for refueling mid-racing in 1982, instead of only putting in new tires. The practice later got banned in 1984, helping develop progressively faster pit stops.

By 1993, pit stops had significantly improved and Benetton recorded the fastest time ever during the Belgian Grand Prix. The Benetton crew pitted Riccardo Patrese for fresh tires in just 3.2 seconds. That may be considered slow over 27 years later, but a lot has changed since then.

In between 1994 and 2009, refueling was introduced in between races, and the speed of the pit stops was determined by how fast the crew could fuel. However, the practice was banned again in 2010 and teams started regularly working under the three-second mark.