It's my party and I'll snub who I want to! 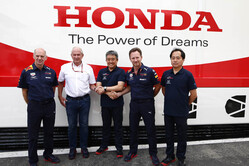 So. Honda is in again, out again, on again or off again? The joy of electing a corporate direction! We will head North! Which way is that? Why, whichever way I am currently facing! Charge!!!

Some years back it was quoted that Honda had a 500-year plan within which to set current decision making so that short-term thinking did not ruin a long term plan. It would appear 500 days is currently the stuff of (earth) dreams. Another old truth from the realm of politics is "Never waste a good crisis." This I believe is a better indicator. Under the "global stresses" of COVID-19, plus the need to "Go Green", Honda has found a defensible reason to bid adieu to the party, grab its hat and coat, and, stepping outside to tap-tap for a swift Uber home... zoom to the nearest Indycar garage.

But why dear Honda? If you'd have stuck with your last foray as a constructor just one more year you'd already be a World Champion. You've achieved so much in racing. Seriously, did Renault slip you a solid wedge of treasury notes to simply stick it to Red Bull, so the French could claim the last laugh?

We are now careering headlong towards a fancy dress party where everyone is dressed as a suit from Mercedes. Oh, except for the guys in the red clown outfits. But no one is talking to them and the girls refuse to dance with them, yet they just simply will not leave.

So. Where to now?

Let's dance with some figures. Miss Physics never had time for boardroom silliness, so we will have to make do with spreadsheets (Why not, the UK governments COVID team does – Ed), and the cold hard logic of the Golden Rule... they who hold the gold, make the rules.

Let's amble back over ten years of road car sales.

Now consider their F1 involvement over those ten years. 2010 to 2013, nothing. Then in May 2013 they announce they are re-entering in 2015 supplying engines to McLaren. Three years of depressing and demoralizing Fernando Alonso and they split with McLaren and for 2018 provided (much improved) engines to Toro Rosso. 2019, and 2020, they supply both Toro Rosso, and the bigger brother treat of Red Bull, with modest, and increasing success.

2015 to 2017, the three years with McLaren were their very worst years on track since their first F1 venture back in 1964... and yet over those three years Honda built their road car sales by an additional one million cars! Then in 2019, their first Red Bull season, they hit a sales peak of 5.3 million, compared to the pre-F1 days of 3.3 million. So, during their dismal on track explod-a-phon years with McLaren they built and built global sales by over two million units. Now they are challenging for the championship with Max Verstappen and global sales are stalling, slipping a hint backward, most probably not aided by the COVID-19 situation.

So. What has happened to the old "Win on Sunday, sell on Monday" mantra? To use a modern phrase, this relationship now appears to be a non-correlation. For Honda it looks more like "Whatever-Sunday, and still flog-a-phon Monday." Or, to add a tad of sophistication, is it more that being seen, and having the name out there, is all that is required, and actual winning, or indeed finishing the race distance, is simply no longer required, as long as people know your name?

Whichever way you look at it, compared to the endless winning with McLaren, Senna, Prost and Piquet the actual impact on the road car business of all the explosions and failures to finish do not appear to have stopped people opening their wallet for, what are on the whole, excellent road cars.

Original NSX? Refined by Senna and a modern classic. Sweet looking, telepathic handling, and a remarkable V6 engine (just a shame it wasn't a V8.). Current Ferrari-equalling NSX hybrid that is a monster tour de force? Well, dear reader, when did you last see one on the road? Or indeed in a showroom? It might be sheer brilliance, but it is not selling. The units shifting are all those mini, mid, medium, and large sized SUVs that possess a handling experience closer to a battle cruiser in heavy seas than a Senna honed street racer! If you are not seeing one or more each time you hop in a car it is probably because you are asleep in the passenger seat, and hopefully not asleep at the wheel.

According to market data Honda sold 238 NSX in America during 2019, compared to 1.6 million cars, and 786,000 trucks, of which over 300,000 were the mid-sized SUV the CR-X. So the NSX might be working as a halo car, or not. Do people watch a Honda powered McLaren lunch itself for the thousandth time that season and think, "Gee, I'm a gonna get me a truck like that!"

Or is it just as likely that when Pop is asked by his loving wife if he is going to replace his current truck with another truck, he replies "Hon, D'oh" (Hon - as in "Honey" in this instance...), and this sound sticks in his mind when he drives down the sixteen lane highway to the strip-mall and sees a huge sign with "Hon-da" written on it, and it sounds familiar... Brand recognition at its most primeval! Good work Honda.

So. Commenced in the 1964 season. First victory at the 1965 Mexican GP, a race won by Richie Ginther, with Dan Gurney second in a Brabham-Climax, with the podium completed by Mike Spence in a Lotus-Climax.

Withdrew in 1968 with falling US sales, and the tragic loss of Jo Schlesser.

Not back as a factory team until 2006, but with six constructors', and five driver's championships between 1986, and 1991 as an engine supplier.

Then back again as a factory team in 2015, and now bowing from the ring and about to grab a cool towel and an energy drink in 2021.

Funny to think they would have been World Champions with Button in 2009 if they had not sold to Brawn. And then Brawn sold to... oh, that's right.

So. Why in and out now? They have annoyed McLaren, are busy annoying Red Bull, and they built the foundations of what is now Mercedes. Goodness, Honda ARE Formula One! Maybe, F1 actually needs Honda more than Honda needs them. So, just maybe it is down to Jenson.

Jenson enticed Honda back into the ring to stick it to people for giggles and nothing more. Settle a couple of old scores while laughing heartily each race at another engine explosion, driver implosion, or intra-team argument! He spent some years racing in Japan, and used to have a wonderful Japanese partner, so I'm sure he knows the back corridors of power at Honda.

It's simple. Nothing to do with brand recognition. Nothing to do with saving the planet, proving a racing point (!) or finally lifting the championship trophies. It is all to do with Honda and Jenson having a jolly fine giggle over the nicely warmed Saki, as they settle scores, annoy the old school, and generally mess with the politics within Formula One.

What would Bernie say? What's that? Oh, he suggested it... silly me.

So. Honda bow out with honour, again, having won the bet with Jenson. Bernie sees another of his ideas to "spice up the show" perfectly executed, and Christian Horner has something new to complain about for the rest of the season before we all get to see the couples counselling sessions he has to attend with Renault!

Dang, pass that warmed Saki please Jenson! I want to toast your genius, the Bernie manipulation master class, the hard work of Honda, and the glorious antics we have been gifted for the next 24 months! You know, just maybe Honda do have a 500 year plan. It is simply that we cannot see the totality of it just yet. Bit too soon...