Ferrari: The Killer of Dreams 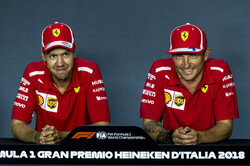 Scuderia Ferrari - on the one hand, is still the most successful and famous team in Formula One. It's the team that every (or most) young hopeful dreams of driving for. Those that win at Ferrari become legends of the sport.

But for every story of success, there are many more of failures. This is a team that burns through driving talent like few others, with precious little to show for it. The news that Sebastian Vettel will be leaving the team after this season (if and when it is ever able to start) means he is the latest victim to return from a spell in red empty handed.

Yes, that may seem presumptuous when there's not actually been any proper racing so far in 2020, but based on the evidence of pre-season testing, combined with Vettel's recent form, and there seems little chance he will be ending his swansong year at Ferrari as champion - not now.

How did we get to this? Only a few years ago everything seemed so harmonious. But, as well as an absence of championship success, that's a common theme for Ferrari in the recent past. They've now had three top tier drivers go there, and fail in the post-Schumacher years.

Of course, you're probably saying that Kimi Raikkonen didn't fail. Signed as Michael Schumacher's replacement for 2007, Raikkonen won on his debut with Ferrari and snatched the title in improbable circumstances as McLaren imploded late in the year. After coming close on a couple of occasions with McLaren, the '07 title should have signalled the start of the Kimi/Ferrari era in earnest. He was, after all, one of the highest earning athletes in the world at that point.

But it didn't take long for the relationship to deteriorate - it began as soon as the very next year, when it felt like Ferrari was already starting to look elsewhere for its next hero. A lacklustre season for Raikkonen, combined with Felipe Massa becoming the team's best hope of the championship - which he won for all of about 30 seconds - cast doubts on how long the Kimi and Ferrari union would last. The fact that the team won the Constructors' championship that year, which is still their most recent success, is now but a footnote in history.

It probably didn't help that Fernando Alonso had become unexpectedly available, following his tumultuous exit from McLaren at the end of 2007. Ferrari probably couldn't believe their luck that they were able to sign the double champion as soon as 2010. Back then, Alonso was considered by many to be the best driver on the grid, and it was surely only a matter of time before he returned the Scuderia to championship success.

But before that came the dismal 2009 season in which the team only narrowly avoided going winless, suffered the unwanted distraction of seeing Massa seriously injured in a horrifying accident, and had the pleasure of paying Raikkonen an exorbitant amount of money to not drive for them for the next season. Yes, Kimi had won the championship for them, but being ditched early in favour of another driver cannot mean his first stint at Ferrari can be considered a total success. Much more had been expected when he'd been announced for the 2007 season, particularly considering the success of the man he was replacing.

Still, the Alonso era started promisingly - he won on his debut (noticing a trend yet?) and was in championship contention all year. There were issues, of course - there always are at Ferrari. This time it was the rather ruthless way in which Alonso established himself as team leader, immortalised in the iconic phrase "Fernando is faster than you" at that year's German race. But this was still the honeymoon period which seemed destined to end in success, only for Ferrari to make a not uncommon strategic blunder in the final race of the year. The championship was handed on a plate to one Sebastian Vettel, and that was that. It was a disappointing way for the year to end - but there was always next season, right?

2011 turned into a near repeat of 2009. Ferrari was left behind in the development race of exhaust blown diffusers, and only secured one win all season as Vettel comfortably romped home for a second straight title. Nevertheless, Alonso continued to operate at a very high level, his determination undimmed.

The 2012 season has already become folklore in the sport's history. It started poorly for Ferrari, which had produced a car that was significantly off the pace of the leading contenders. But the indomitable Alonso dragged the team kicking and screaming to a position it really shouldn't have been in - championship contention.

If not for first corner retirements at Spa and Suzuka, Alonso would have surely been rewarded with a third championship, and a first at Ferrari. Yet as it was he missed out to Vettel yet again by the narrowest of margins in a season finale showdown. Perhaps more than 2010, this was a devastating loss - and probably the start of any doubts Alonso had as to whether he'd ever win a championship at Ferrari.

A fractious 2013 would follow, where Alonso and Ferrari were once again distant runner ups. As Vettel charged to nine straight race victories and a fourth successive title, it seemed as if it was becoming inevitable that Alonso would soon depart the team. Ferrari was so concerned by the prospect, they brought in the rejuvenated Raikkonen to the second car for 2014. Alonso remained for one more year, and Ferrari suddenly appeared to have one of the strongest driver pairings on the grid.

Few would expect that this would coincide with the start of the Mercedes era, and fewer still would expect 2014 to be quite such a disaster - easily Ferrari's worst season in modern history. Raikkonen would prove no match for Alonso, the team would slump to fourth in the competitive order and suffer a winless season. Alonso, who had become increasingly frustrated, would finally depart at the end of the year. How had this combination, which seemed a match made in heaven, failed to win even one championship? It seemed barely conceivable.

Some blamed Alonso - the Spaniard had long held an unfortunate reputation of being a disruptive force and difficult man to work with in challenging times. Others pointed the finger at a lack of leadership at the top. The relatively unheard of Marco Mattiacci, who had little experience within the sport, had been thrust into the unenviable position of principal at F1's biggest pressure cooker.

Sebastian Vettel entered as the next man to try and turn things around, together with new team boss Maurizio Arrivabene. Vettel, who had made no secret of his desire to emulate his idol Schumacher's success at Ferrari, was also in need of a change of scene after a disappointing 2014 campaign at the previously dominant Red Bull. Once more, things started positively.

Never mind that Mercedes was once again mostly untouchable. Vettel didn't win on his debut, but did take a surprise win in only his second start with the team, in which he proclaimed that "Ferrari's back" in jubilant post-race scenes. Hopes were further raised that Seb would be the one to return the team to greatness with additional consistently strong performances - including an extra two victories - throughout the rest of the season.

Vettel looked reinvigorated, and had re-invented himself as a fan favourite after several years of being the pantomime villain. Ferrari too appeared on the upward curve, emerging as closest (but still distant) challenger to the all-conquering Mercedes.

All this raised expectations for 2016. Yet the season would be summed up in a microcosm at the very first race of the year in Australia. It was a race that Ferrari should, and likely would, have won if not for another tactical blunder during a red flag period. From there followed mechanical problems, collisions, an increasingly irate Vettel, and ultimately a second winless season for Ferrari in three years. Was the dream over already?

Not yet - a change in regulations for 2017, and an improved Vettel, took the fight to Mercedes admirably at the start of the year. He became the first non-Mercedes driver to lead the championship since the end of 2013, and would continue leading until the summer break.

But then the first flashpoint in the Vettel/Ferrari era occurred at a damp Singapore. Mercedes and Lewis Hamilton were on the ascendance and had been eating into Vettel's advantage. Yet at Singapore, with Hamilton off the pace and Vettel on pole, it was the perfect opportunity to reclaim the momentum.

Any hope of that happening was extinguished within seconds of the lights going out. Vettel, after suffering a sluggish getaway, moved across the track aggressively and collided with the fast starting Max Verstappen and his even faster Ferrari teammate, Kimi Raikkonen. The latter two were out at the first corner, with Vettel retiring before he'd even completed a lap. Lewis Hamilton avoided the chaos and won.

It was a crushing blow, and one that took the wind out of Ferrari's sails. Mechanical issues plagued the team for the remainder of the season, which always felt like it was in terminal nose-dive after Singapore. The final points tally didn't accurately show just how close Vettel had come to returning Ferrari to championship glory, but most agreed he had to shoulder some degree of responsibility going into the winter.

2018 should have been the year when the mistakes from the previous year were ironed out. Indeed, once more, things started strongly, with Vettel winning the opening two races and Ferrari appearing even more of a match for Mercedes and Hamilton. Points were needlessly thrown away in several incidents though, but heading into Germany the picture looked positive. No more so than after qualifying when Hamilton had suffered mechanical problems, consigning him to fourteenth on the grid, and Vettel had taken pole.

Then came the second flashpoint. In a race he really should have won, Vettel inexplicably dumped his car in the gravel during a rain shower. Just as in Singapore the previous year, the mistake was entirely his - and Hamilton was the beneficiary once again, taking a dramatic victory.

From then on, Vettel didn't seem the same driver. Yes, there would be another win at Spa, but it was combined with driving errors at Monza, Suzuka and COTA, all of which resulted in Hamilton taking a relatively easy fifth title.

Ferrari began to question whether Vettel was the driver to take them back to championship success. The year ended with another change, Kimi Raikkonen, a close mate of Vettel's, and rarely able to challenge him in previous years, was ditched in favour of hot-shot Charles Leclerc for 2019. Arrivabene was gone as well, with the softly-spoken Mattia Binotto brought in to replace him. Despite all this, it was still expected that Vettel would be team leader, with Leclerc serving as dutiful understudy.