After The Reigns - Part 3 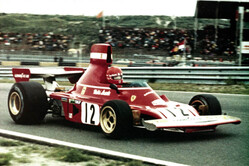 Recharge your glass or cup, robust reader, for we are marching firmly forward with another host of champions. We complete our historic amble with the decades that were the '70s and '80s. Do please walk along with me.

A new decade and a wonderful new champion. 1970 saw Jochen Rindt win the title in a Lotus-Ford, but not live to lift the trophy. Jochen's last win was the 1970 German Grand Prix, before crashing heavily during practice for the Italian Grand Prix at Monza. Denny Hulme was behind Jochen following him at around 330 kph (205 mph) into Parabolica when Rindt's car started to move erratically under braking. Jochen ploughed into the barriers at high speed, where a badly installed crash barrier was blamed for his instant death at the age of 28. He remains the only posthumous World Champion, and with all blessing to the dear man, may that remain forever so.

1971 was once again a triumph for JYS, this time in a Tyrell-Ford. 1972 and Emerson Fittipaldi pilots a Lotus-Ford to glory. Emerson had been the third driver at Lotus, but after Jochen's death he was effectively promoted within the team, going on to win the championship at the age of 25, making him the youngest World Champion, a record he would hold for 33 years.

Emerson won the championship for a second time in 1974 driving the Marlboro McLaren, before hopping teams for a few years with diminishing success before retiring from Formula One in 1980. He then moved to the US CART series, winning the championship in 1989, while also winning the Indy 500 in 1989 and 1993, at the age of 46. He has the honour of having a Corvette limited edition named after him, and raced as recently as the 2014 6 Hours of Sao Paulo. A remarkable all-round driver, and a successful businessman, Emerson continues to enjoy life at the age of 73.

1973 was again a Sir Jackie year, before Emerson won again in 1974, bringing us to 1975, and an entertaining Austrian in the form of Niki Lauda.

Niki claimed the season with five wins, the first at Monaco, and the last at the US Grand Prix in his Ferrari 312T. The 1976 season is the stuff of legend after Niki nearly lost his life in a horrific crash at the Nurburgring and was back in the car weeks later to only lose the title to James Hunt at the final race of the season.

Niki would win the championship again in 1977 with Ferrari, and then 1984 with McLaren TAG. He then founded airlines, was a general businessman, and busy (cheeky) chap across Europe before focusing once more on motor sport with the current Mercedes Formula One works team.

He passed on to the great Parc Ferme in the sky in May 2019 at the age of 70 from complications going back to his horrid 1976 crash. The entire pit lane was united in honouring him, with Lewis Hamilton noting it was the greatest honour to be able to call Niki "friend".

1976 and James Hunt, a gloriously eccentric Englishman wrests the championship from an injured Niki at the final race of the season. Piloting a McLaren-Ford to six victories, he needed third place in the final Grand Prix in Japan to claim the title. James was the personification of the gentlemen, bad boy, cheeky chap, stupidly talented racer. 1976 was a high watermark, followed by another three years of slipping slowly down the field, before, mid-way thorough the 1979 season, he walked away from the sport.

A busy personal life (...!) breeding birds, driving an old Austin A35 van, and cycling, also saw Hunt create a legendary TV partnership with Murray Walker, commentating on races at nearly the same speed he drove them. Hunt passed away from a heart attack in his bed in June 1993 at the age of 45. After Denny Hulme, who had passed away eight months earlier, he was only the second world champion to die from natural causes.

1977 was back to Niki, and then 1978 saw Lotus and Ford carry a new name to the championship, a charming Italian-American by the name of Mario Andretti.

Born in what was then Montona, Istria, Kingdom of Italy, and which today is known as Motovun, Istria County, Croatia, Mario moved with his family to the US after World War 2. Much like Sir Jackie, Mario deserves entire chapters of history to himself. He has raced, and won, in most motor racing categories and is the source of one of my all-time favourite racing quotes about how to judge if you are driving fast enough to win; "If you're not scared, you're not going fast enough." Beautiful.

Mario won IndyCar four times (three under USAC-sanctioning, one under CART), the Indy 500 once and countless other racing series, and this lone Formula One championship of 1978. Le Mans? Yep. Daytona? Check. He raced on in Formula One until 1982, and last raced Le Mans in 2000. Mario's wife Dee Ann died of a heart attack in July 2018, but Mario and their children continue, with Mario being an ambassador for the Circuit of the Americas. He is now 79, and long may he continue in wonderful sunset years.

Winning Spa, Monaco, and Monza that year, Jody drove an excellent season in the Ferrari 312T4, with the monster Ferrari flat-12 out back. Sadly his follow-up year defending the title in the Ferrari 312T5 was an unmitigated disaster, and finishing 19th (truly...) in the championship he retired from the sport. Four retirements, a DNQ in Canada, and a best placed finish of 5th at the US-West GP was a horrid season.

Jody went on to win the TV series "Super Stars" in 1981 beating other retired, but still seriously fit, field and track athletes, for the first time showing the world you needed to be world class fit to be a Formula One Driver. He also used suntan oil on his shoes for the "squat-thrust" challenge, and showed the others a thing or two about "the spirit of the rules, and the rules as written" as only Formula One can teach...

Jody went on to generate a name for himself in organic farming, appearing on TV to promote his approach, and was all organic over a decade ago, long before the latest fad for murdering plants. He has been a TV presenter for F1, and continues to generate organic food at his farm, Laverstoke Park, near Overton in Hampshire, with his second wife Clare. Jody had a total of six children, two from first wife Pamela, being Toby and Tomas both of whom have tried their hand at racing, and four with Clare. Along with John Surtees Jody has lived through the terrible grief of burying a child, a dear daughter late last year.

With ten wins, one championship, and 33 podiums, Jody continues to enjoy retirement today at the age of 70.

1980, and a new decade (or not, if you buy into the entire "no year zero" argument...) and another new champion in the form of a 110% Ocker Aussie, Alan Jones. Not shy in coming forward, or backward, or sideways, Alan grabbed the 1980 season by the scruff of the neck, and carried it kicking and screaming back to the Williams headquarters, with a Ford engine doing as told in the back. Alan drove for just about everyone, with the hit rate of Fernando rather than that of Fangio. His championship winning FW07B was the first car to win the championship for Williams, and indeed the last car to carry an Australian driver to GP victory on home soil.

Alan went on to be a TV presenter, a touring car driver, and a poor investor, consequently being forced into selling a number of his trophies in later life. Married a couple of times with a goodly count of children, Alan continues to enjoy retirement at the age of 73.

1981, and Nelson Piquet raises the trophy for Brazil and Brabham, once again powered by Ford. 1983 and Nelson repeated the championship win, this time at the wheel of a Brabham-BMW, with one last championship in 1987 for Williams-Honda.

In each championship winning year Nelson took the title at the fifteenth race of the season. For his first two this was the final race of the season, while in 1987 the season was 16 races long, so he won with a race to spare. Nelson raced on until 1991, still winning, with his final victory being the 1991 Canadian Grand Prix in a Benetton-Ford. He retired from Formula One at the end of the year but continued racing in other series, including Indy.

A colourful character, Nelson has been known for his wit, his forthright language, his multiple marriages, numerous children, boom-bust business ventures, and once being banned from regular public driving for excessive, repeated, speeding and parking fines.

At the age of 67 he continues to run various businesses in his native Brazil, including managing his two racing sons, Nelson Piquet Junior, and Pedro Piquet.

Williams-Ford took the championship again in 1982 with the cheeky Finn, Keke Rosberg. Racing from 1978 to 1986, Keke took a modest five wins during his career, but was an exceptionally strong driver who was frequently in the mix for a variety of teams over the seasons.

Keke went on to race in other series with modest success, created his own team in the DTM championship, and manage several F1 one drivers, most notably JJ Lehto, Mika Hakkinen, and his own son, Nico, with the latter two both winning world championships.

When Nico won in 2016 it made them only the second father- son combination to achieve the feat, with Graham and Damon Hill having achieved it first. At the age of 71 Keke continues to pursue various business interests and generally enjoy life.