Alonso: ROAR is going to be fun! 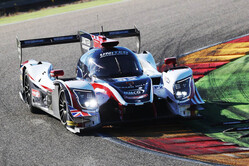 Fernando Alonso will be in action this weekend with the ROAR before the 24 – the official test for the Rolex 24 at Daytona.

The Spaniard will join Lando Norris and Phil Hanson in the 23 car, along with Bruno Senna and Paul Di Resta who join United Autosports regular LMP2 racers, Will Owen and Hugo de Sadeleer in the 32 car.

The Anglo-American squad is fielding two Ligier JS P217s in the 56th running of the 24-hour race in Florida.

Six of the team's seven drivers have tested with the team prior to the ROAR, Alonso getting to grips with the Ligier at Aragon in November, while Norris and Di Resta tested at Paul Ricard. Owen and de Sadeleer completed a full season in the European Le Mans Series with the team in 2017, finishing second in the championship. Hanson also has experience of the Ligier, having raced in the ELMS and selected rounds of the WEC in 2017. Senna is the only driver not to have completed any laps in the United-run Ligier, although he is no stranger to LMP2 and prototype racing, having won the 2017 WEC LMP2 Championship.

On track action begins on Friday (5th) with two test sessions. Further test sessions will be held on Saturday and Sunday with a 15-minute qualifying shootout being held on Sunday afternoon. This shootout will determine the garage layout for the Rolex race week.

"It's a true pleasure to go back racing in the States, in front of the US fans," said Alonso. "In less than a year I will have competed in two legendary races, which makes me very proud.

"I have always wanted to challenge myself in other categories of motorsport," he continued, "as this is what you need to become a better driver. Going out of my comfort zone by taking part in such an iconic race as the Daytona 24 Hours is just amazing. I am looking forward to racing for the reigning European LMP3 Champions.

"At the test we had in Spain in November, everyone made me feel extremely welcome and part of the family and I'm happy to be spending more time with the team and my team-mates in a few days, at the ROAR.

"I just cannot wait to jump in the car again and drive on the famous oval. In the last couple of months I have been spending time watching several Daytona 24 Hours, which made me even keener to go out there and try myself. It's going to be fun!"