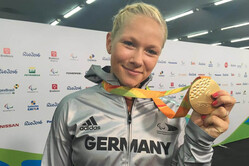 Vanessa Low is the winner of the inaugural Keep Fighting Award, which will be presented for the first time on January 30, 2017 at Europe's largest sports business congress, SPOBIS, in Düsseldorf.

The Rio Paralympics Gold medal winner was chosen by the family of Seven-time Formula 1 World Champion Michael Schumacher as "this impressive figure embodies and conveys the values that this prize wants to promote: to never give up and; despite setbacks to positively shape the future" said Sabine Kehm, on behalf of the Schumacher family.

The Keep Fighting Award is the first action of the Keep Fighting initiative, which was recently launched by the Schumacher family for charitable purposes. The global initiative is inspired by the former Formula 1 World Champion who has been admired for his fighting attitude during his entire international career and has been supported with great sympathy, since his accident in late 2013. "With this initiative, Michael's family would like to return some of the positive energy they receive from his wonderful fans, through a range of charitable projects” said Ms. Kehm.

Vanessa Low, from Ratzeburg, lost both her legs in an accident at the age of 15, but has been impressive from the outset with her attitude, her fighting spirit and the open attitude with which she overcame her fate and stresses. At the Rio Paralympics in 2016 she shone - after she had also mastered sporting setbacks - by setting a World Record in the long jump and a personal best performance in the 100 meter sprint, which brought her the Silver medal.

The 2016 German Disabled Sportswoman of The Year, who currently lives in Australia, is looking forward to actively supporting the values of the Keep Fighting initiative: "I admire the Schumacher family for their courageous step. I am completely behind the values that this Award represents and I am very happy to help spread them. I was very surprised on first learning I was the winner, I am very proud I have been selected and I would like to thank them for it."

Low will be presented with the Keep Fighting Award by Jean Todt, President of the FIA and a long-time friend of the Schumacher family. The laudation will be delivered by reigning Formula 1 World Champion Nico Rosberg, who from 2010 to 2012 was Schumacher's team-mate at Mercedes.