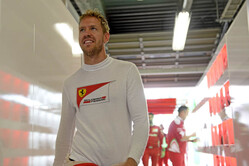 Ahead of today's second practice session the air temperature is 16 degrees C, while the track temperature is 35 degrees. It is still cooler but better than this morning.

Lewis Hamilton set the pace in this morning's session - as he so often does - with the Ferrari duo second and third. Nico Rosberg was a distant seventh 0.795s off the pace but we shouldn't read too much into that.

What we should into is the fact that the track is very dusty and grip is not helped by the cool temperatures either. Furthermore, the use of all three compounds gave us little opportunity to do any meaningful comparisons.

For example, Hamilton's best time was set on the medium, while the Ferraris were on softs and the Force Indias in fourth and fifth on supersofts... a real mixture.

A number of drivers also suffered brake issues, most notably Max Verstappen, Christian Horner subsequently claiming that they were "out of control".

The Briton puts this down to the thinner air, Mexico City being at such a high altitude, a geographical factor that also effects aerodynamics and the engines.

To further liven things up the session was red flagged when Felipe Nasr's front wing disintegrated and at the very end of the session there was a brief rain shower at T3.

The lights go green and as in FP1 Grosjean leads the way, followed by Wehrlein and Raikkonen.

As Wehrlein posts 32.162, Grosjean is advised he has a problem and is told to pit. Having made a mistake at T13, the Frenchman is told his shifting is OK.

The softs improving on the second lap, Wehrlein crosses the line at 22.909 to go quickest.

Like Wehrlein, Raikkonen improves on his second lap, stopping the clock at 22.075. Despite being quickest in S1, Vettel can only manage 22.951.

Eight minutes in and Rosberg heads out, leaving his teammate, Ricciardo, Bottas and Button as the only no-shows.

A big, big moment for Verstappen but he keeps it all perfectly under control. Elsewhere, a brief spin for Perez at T5 and Rosberg runs wide in T1 following a big lock-up.

Asked if he incurred any damage Perez replies: "It's very loose".

Rosberg's first timed lap is a 29.666 while Hamilton posts 31.849. However, next time around the Briton goes quickest in all three sectors, finally crossing the line at 20.362.

Ericsson spins at T11 as drivers continue to struggle.

Rosberg improves to fourth (22.041) as Grosjean's day appears to be at an end, the team understood to be needing a possible hybrid change.

As he disappears in a cloud of tyre smoke, Hamilton warns: "This tyre is completely done guys."

Similar problems for Jenson Button aka Capt. No Grip, who confirms, not for the first time, that he is struggling. "The rear feels like it's just falling over, big snaps all the time," he says.

"I have a lot of oversteer," says Bottas, his voice trembling with the vibration, "especially right-hand corners."

Vettel is the first driver to switch to the supersofts, as Rosberg, on mediums, improves to second albeit 1.054s off his teammate's pace.

On his second flying lap on the supers, having aborted the first, Vettel goes quickest. He maintains the pace in S2, finally crossing the line at 19.790.

Consequently, Vettel now tops the timesheets on supers, ahead of Hamilton (softs) and Rosberg (mediums).

Now Raikkonen switches to the red-banded rubber, what can the Finn do?

Vettel pits but his crew is unprepared so he heads out again.

Raikkonen can only manage PBs in the first two sectors, finally crossing the line at 20.259, 0.469s down on his teammate.

More drivers now switch to the supersofts, most notably the Mercedes duo.

Hamilton, as expected, goes quickest in S1, though he loses a little pace in the second sector. At the line he posts 19.803, to go second 0.013s off Vettel's best.

As Hamilton complains of traffic, Hamilton is told that the team wants to get on with "the programme". He responds by going quickest in S2, finally crossing the line just 0.004s off Vettel's time.