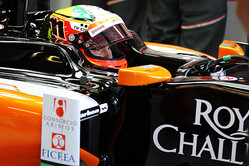 Sergio Perez: "It was definitely a great qualifying session and the team did a fantastic job to give me such a competitive car. After the problems we had in the first two races I feel this has been the first real opportunity to show the potential of the car. I believe we could have been even closer to the front, but I couldn't warm up my brakes enough on the out lap of my final run in Q3 and so I didn't improve. We're already thinking about tomorrow and I think the clear target must be to aim for the podium. We're in the best possible position to fight at the front and I'm going to make the most of it. I've got some very good memories of this track but tomorrow I want to create even better ones."

Nico Hulkenberg: "My lap in Q2 was not the best one. I made a mistake in turn 11 and ran wide on the exit kerb, which completely ruined my lap. I lost a couple of tenths and that made the difference between making it into Q3 and missing out. I do believe the chance for a good result tomorrow is still there and I feel optimistic. We showed on Friday that we have good long run pace and I have two new sets of soft tyes for the race. The strategy decisions for tomorrow will be important to help me move forward and with the cooler conditions it should be easier on the tyres compared to Malaysia."

Vijay Mallya, Team Principal and Managing Director: "Qualifying under the floodlights looked spectacular tonight and Sahara Force India put on a good show. Sergio has been quick all weekend and his qualifying performance today puts us in a strong position to challenge for a great finish tomorrow. It looks like he will start from fourth place, which is the best starting position for a Force India since the 2012 German Grand Prix [Hulkenberg started fourth]. Nico also should have been up there with Sergio in the top ten, but he made a small mistake on his final lap in Q2. It's disappointing but tomorrow is the most important day and hopefully he can demonstrate the competitive long run pace we saw during practice yesterday."